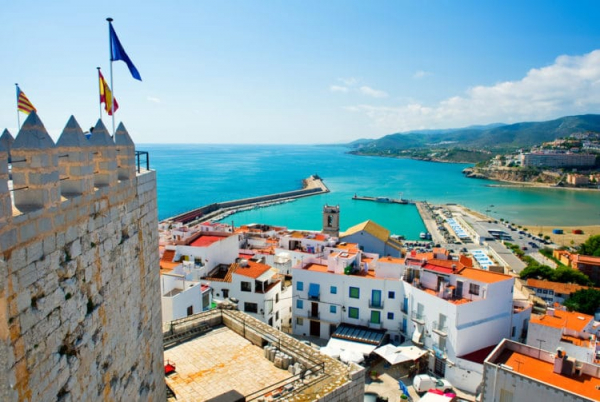 If you're planning a tour of Valencia, you're in for a great time. What places are worth visiting and what to see in Valencia in the first place? We have compiled a rating of places where we have included the most interesting sights of Valencia.

What to see first in Valencia

If you are tired of the rush of big cities, a holiday in Spain is a great solution. Valencia is great for visiting with children, it is interesting for travelers of all ages to relax here.

So, where to go in Valencia for tourists:

1. City of Science and Art 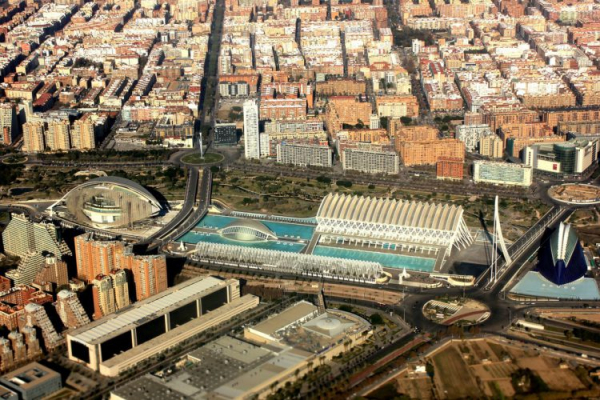 Top view of the City of Science and Art in Valencia

A gem of architecture and a fascinating place. If you want to recover in the future, be sure to visit the town. The architects were able to combine their vision of the space era of the future and animal skeletons in a unique way. The town is divided into separate parts and consists of the Science Museum, the Oceanographic Park, the Planetarium, the Umbrakle Botanical Garden, the Sofia Palace of Arts and the Agora Center.

If you do not know what to see in Valencia in 1 day, feel free to go to this place. A lot of positive emotions and stunning sea views are guaranteed to you. Plan to spend the whole day to get acquainted with the interactive ambitious project of architects, educational and entertainment complex.

The main attractions of Valencia are represented by striking architectural objects. The city gates are the bearers of a long fascinating history. They were erected at the far end of the 14th century, and from the 16th century and for 4 centuries they were used as a prison.

The stone structure stands on the site of defensive objects of the Roman era. She admires with her monumentality, noble lines and power. The prototype of the gate was used by the Catalan monastery. From the high towers you can enjoy an amazing panoramic view of the city. 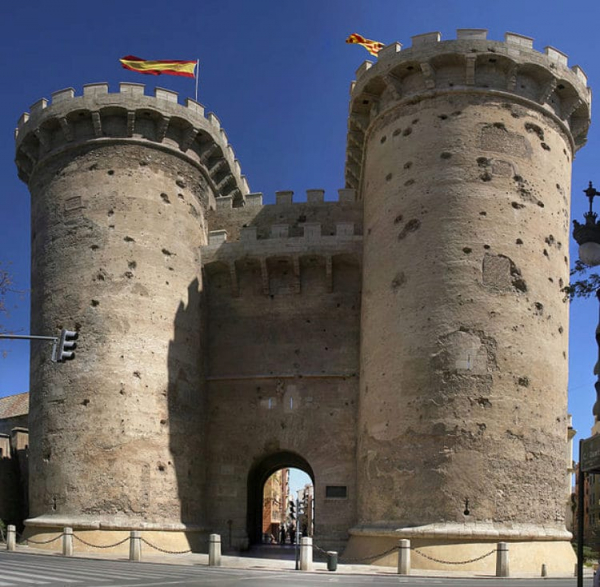 The majestic towers of the Quart Gate Hans Hillewaert

The sights of Valencia reflect the history of the city. The fortress entrance gate leads to the historical part of Valencia. In ancient times, they were part of the local wall, the remains of which are located near the towers.

Initially, the gate was built as a military facility. After the demolition of the wall, they received a new purpose, becoming a women's prison. 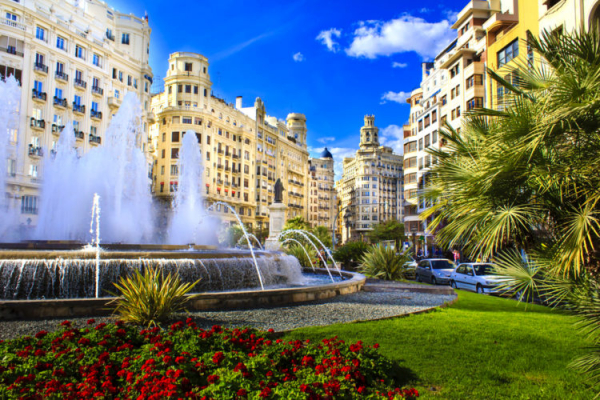 One of the most impressive central squares of the city and, according to reviews, a favorite place for tourists and local residents.

The square is surrounded by large-scale buildings with exquisite architectural design. On the territory of the sights of Valencia, three complexes are presented at once: the city hall, the trade collection, and the central post office. There is a fountain in the very center. 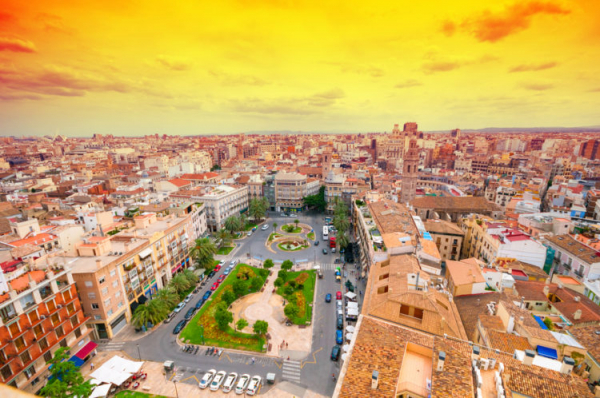 Queen's Square is located in the heart of the Old Town

The square is considered an important historical site of the city. On its territory there are the best restaurants and the famous shrine – the Cathedral. It contains a holy cup – Jesus himself drank from it. The Miguelete Tower on the territory of the square is the highest point in the city. It offers an amazing panorama.

See the magnificent views of Valencia in this beautiful video!

It bears the title of the central cathedral of the city. It is believed that from the agate Grail, which is kept in this place, Christ took communion at the Last Supper. The church recognized her as a real shrine. Also, the cathedral is known for paintings by Goya, a museum. All tourists can climb the bell tower of the shrine.

7. Church of the Virgin Mary Protectors of the Dispossessed 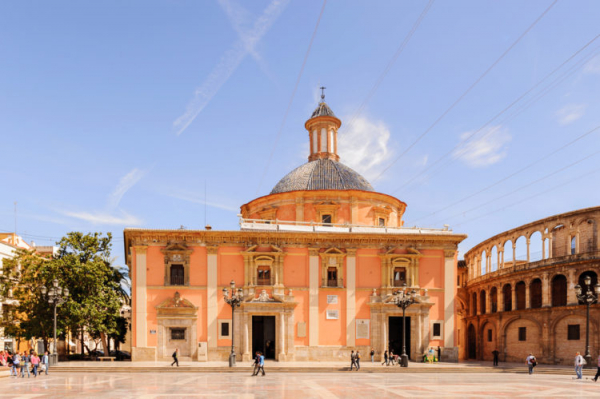 The modern sights of Valencia are represented by many holy objects. The Temple of the Defender of the Dispossessed is a holy place for the locals. It contains the image of the patroness of the Blessed Virgin. Residents are sure that it keeps the city from diseases and troubles.

The construction of the sights of Spain lasted from 1652 to 1666. The statue of the Mother of God was originally represented by a reclining figure, therefore it is slightly tilted forward. She was laid on the coffins of the dead, which meant protection, patronage.

8. Church of the Holy Catalina 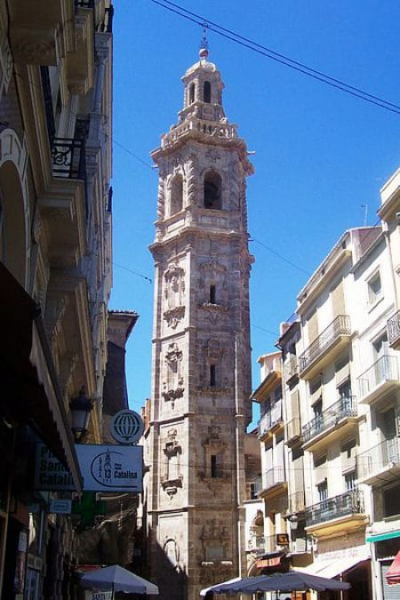 Belfry of the church of Santa Catalina HombreDHojalata

The architectural monument stands on the site of an ancient Arab mosque. The Christian history of the building begins with the Christian history of the city. During its existence, the temple has repeatedly changed its styles. On a tour of Valencia, you will see an impressive architectural ensemble that reflects the many fashion trends that were present in the dominance of various eras of the city. 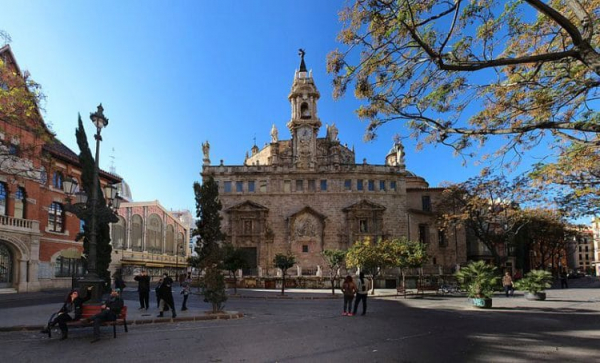 The shrine is located opposite the Silk Exchange. The original Gothic building has been restored many times over the history of its existence, and today it combines the features of various eras. She has an interesting history. In the past, there was an Arab mosque here. The fascinating interior, which the court painter was engaged in, is striking and impressive. The shrine is decorated with frescoes depicting saints.

10. Palace of the Marquises of Dos Aguas 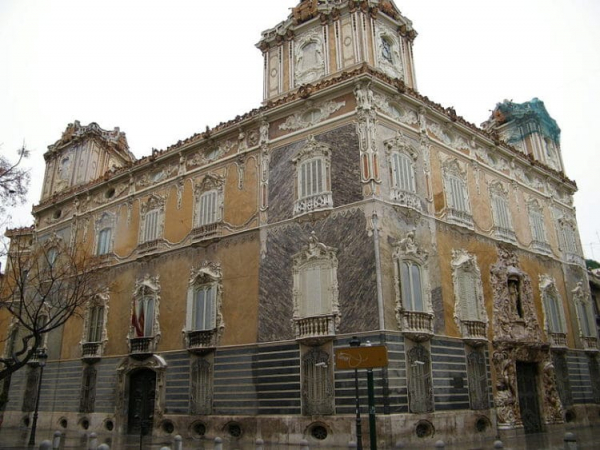 The magnificent facades of the palace, decorated with carved alabaster Dorieo

Interesting places in Valencia include the palaces of noble people. The palace was built for a noble family of Valencia and is included in the list of the most popular places and main architectural monuments in the Baroque style.

The construction acquired its modern appearance after 1740, when a major rebuilding was carried out. Today it houses the National Ceramic Museum. 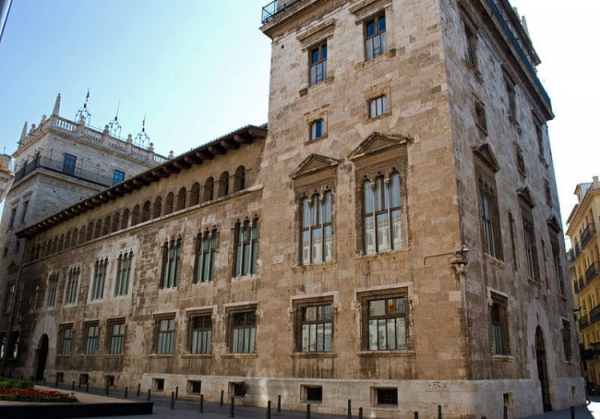 The coolness and silence of the government palace surprise tourists who came here from the noisy square for the first time.

These structures were erected for the city government more than half a century ago. The sights of Valencia beckon with mystery, mystery and are considered a real masterpiece, despite the fact that one of the towers of the palace is destroyed.

The architectural object was erected in the middle of the 17th century. Initially, it was used as an educational institution for the clergy. Here, any tourist has the opportunity to get acquainted with the history of the city, household items, furniture, architectural finds. Most of the collection of Valencia attractions is dedicated to the works of Spanish artists. 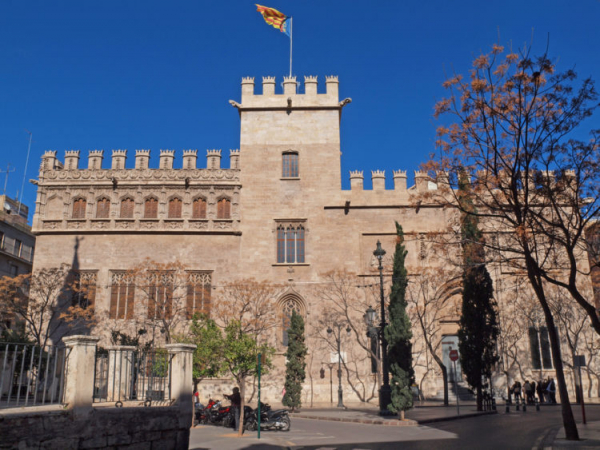 When planning a trip and what to visit in Valencia, be sure to include this place in the list. Silk was traded in this territory centuries ago. Today, it reflects the power of outlets of the past. It is listed by UNESCO as a vivid reflection of late Gothic.

The Silk Exchange was built between 1482-1548. It is a unique reflection of Gothic architecture and the prosperity of a large-scale trading center in the Middle Ages. Today it is presented as a museum, which attracts with its ancient design and unique performance. 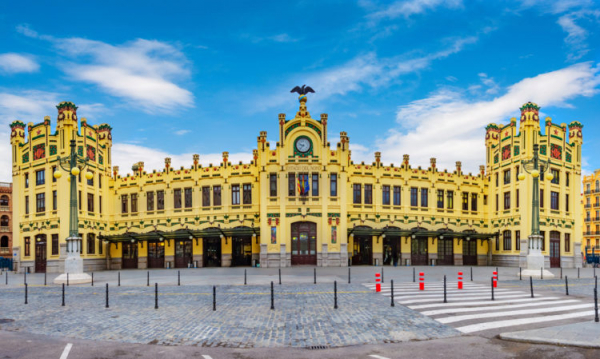 The railway station is a fascinating architectural monument. Spectacular building is made in the Art Nouveau style. A trip to the city and acquaintance with the tourist center begins with this object.

The northern station, the main station of Valencia – the names of one and the same attraction. It is rare that a train station is a genuine piece of architecture, but this is exactly the case here.

The architecture of Plaza de Toros resembles the Roman Colosseum

A popular place for entertainment and recreation for many tourists. A massive national holiday, Bullfighting, is held here, conveying the national spirit of the country. For centuries, visitors have been getting a lot of adrenaline and vivid emotions in the big arena.

Bullfighting attracts thousands of people. An incredible sight will become the most memorable of your vacation.

Valencia attractions: what else to visit in Valencia 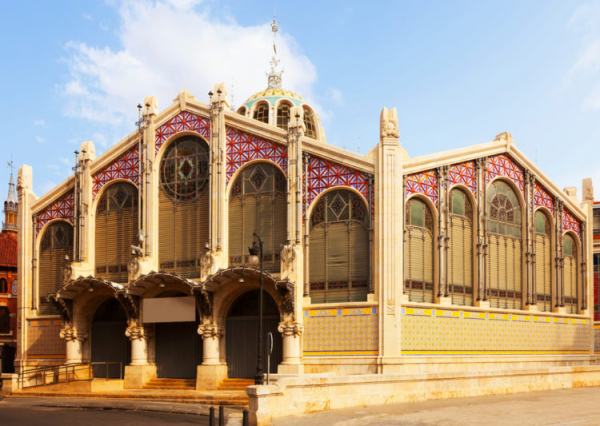 It bears the title of the largest grocery covered market in Europe. Located near the Silk Exchange. It uniquely combines the features of ancient architecture and local flavor, expressed by stained-glass windows, panoramic windows with original decorations. There is a very large assortment of fresh products from all over the world. You can buy exotic goods, all kinds of food, as well as souvenirs only before lunch. In a picturesque place, it’s good to just take a walk, look at the shop windows. 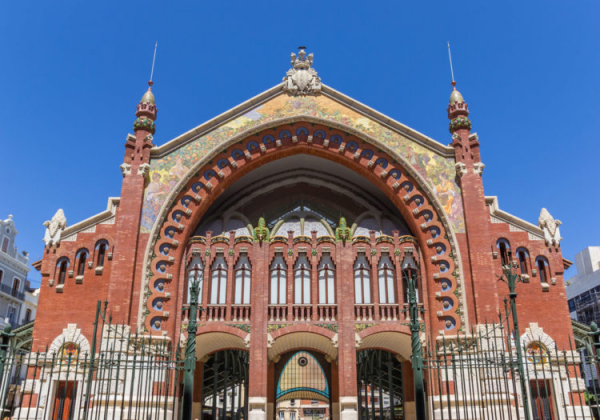 In ancient times, the market was considered an ordinary Spanish bazaar and an architectural masterpiece of national importance. Since 2003, it has been a large-scale shopping and entertainment center. On its territory there are entertainment complexes, boutiques and much more. Every day, local residents and tourists walk along the huge, beautiful state square. 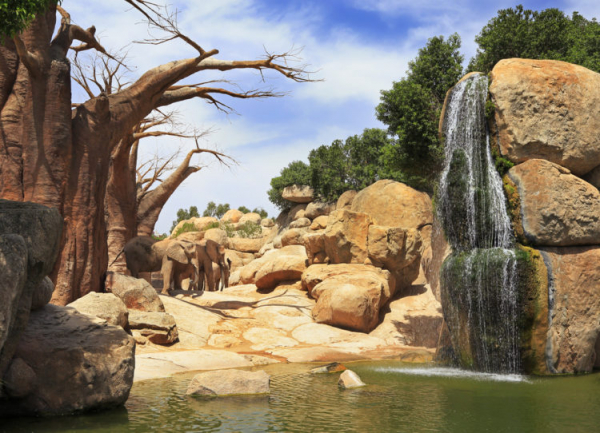 The zone of equatorial Africa in the Valencia Bioparc

If you don't know what to visit in Valencia with kids, put this place on your list. In the interactive zoo, there are no bars between guests and animals, except for the moments when it is necessary to ensure safety. An interesting design of the zoo masks any barriers, creating the impression of falling into the natural habitat of pets. Various representatives of the fauna live here – elephants, rhinos, gorillas and many others. 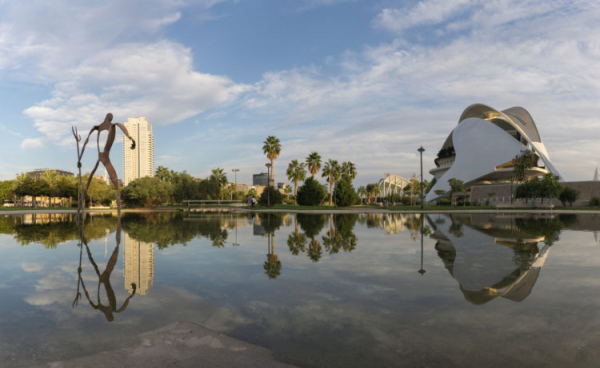 Here you will find fountains, exciting paths, football fields. And all this is located at the very bottom of the Turia River, in its former channel, which was “transferred” from the city in the middle of the last century 3 km to the side. It happened in 1957 after the flood.

The gardens stretch across the city. Great place for sports, walking, reading books. 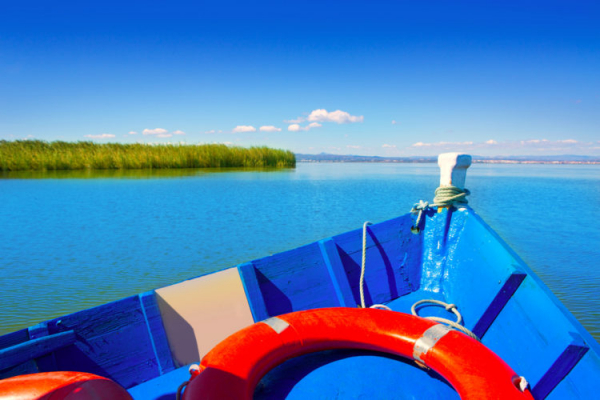 Boat trip on the freshwater lake of the Albufera Reserve

Fascinating reserve, which is home to many different waterfowl, and one of the favorite places for photographers. The word “Albufera” is translated as “little sea”. The name accurately describes this place. Interestingly, many birds are not afraid of tourists at all and fly very close to them.

< p> Valencia is a compact city. Many hotels in Valencia are located in the old town, so tourists can easily reach most of the sights on foot. The city has a metro, taxi. Holidays in Valencia are multifaceted, it is interesting to just walk here, enjoy interesting objects, the sun, cleanliness.

Read also about the sights of Seville and be inspired to travel further in Spain.