For the opening of the winter season 2022-2023 at Rosa Khutor, the Russian Post initiated the issuance of a special transfer stamp. Its print is adorned with the inscription: “Greetings from the Rosa Khutor resort!”, as well as an image of the main attraction of the Sochi mountain cluster – the town hall with a clock on Roza Square.

Now all guests of the Rosa Khutor resort can send their postcards with an imprint of a thematic stamp from the post office 354392 to the address: Krasnaya Polyana, st. Trudova Slavy, 3. The stamp will be kept in the office for five years.

“Rosa Khutor” — this is the most popular mountain resort in Russia, which welcomes many tourists, athletes and vacationers from all over the country. Now on postcards, letters, parcels with souvenirs from the resort there will be another memorable element — stamp imprint. The postmark will not only decorate the departure, but also fix the date when the guests of the resort rested in our region, — Elena Babak, director of the Krasnodar Territory Department of the Russian Post, said. 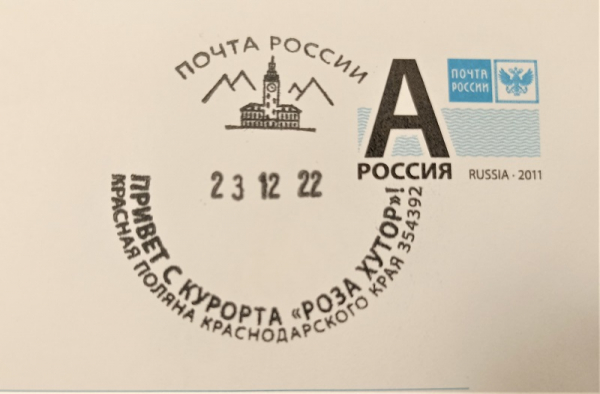 Year-round mountain resort "Rosa Khutor" is a prime example of an effective legacy  XXII Olympic and XI Paralympic Winter Games 2014. It was here that the first competitions of the Games in Sochi were held and 30 sets of Olympic medals in 15 sports disciplines (alpine skiing, snowboarding, freestyle), almost a third of the total number of sets of medals (98), as well as 32 of 76 sets of Paralympic medals were played. Today the resort has the most extensive ski area in Russia – 105 km of slopes, as well as an extensive map of hiking trails in the mountains. In the winter and summer seasons, almost 2 million guests rest here.

“We are glad that our cooperation with the Russian Post continues successfully. A couple of years after the Olympics, a special postage stamp was created with the resort's most recognizable symbol – town hall. Now there is a unique stamp, and I hope our guests will have a good tradition –  in memory of the holiday in the mountains of Sochi, make various postal items with him,” said the general director of the Rosa Khutor resort. Alexander Belokobylsky.

To be always up to date with our news, subscribe to the Mail telegram channel https://t.me/napochte

“Rosa Khutor” — year-round world-class mountain resort, the largest Olympic venue of the XXII Olympic and XI Paralympic Winter Games 2014 in Sochi, located an hour's drive from Adler International Airport. In winter, ski slopes, designed by the best experts, with a total length of 105 kilometers, 32 lifts, are at the service of vacationers. In summer, hiking and cycling routes along the picturesque mountain slopes are in active demand. The resort has 19 hotels of different star ratings. Since 2013, “Rosa Khutor” annually recognized as the best ski resort in Russia according to the World Ski Awards.