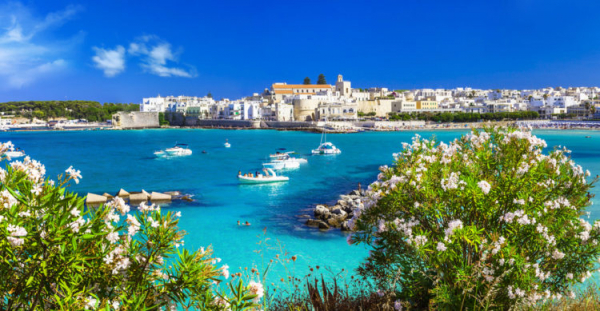 Puglia is the eastern part of Italy, it is located on the so-called “heel” of Italy. Since this region has the longest coastline in Italy, about eight hundred kilometers, here you can enjoy plenty of beautiful sandy beaches, clear sea and incredible landscapes. “Heel” is washed by two seas – the Adriatic and the Ionian, and in its composition has six excellent provinces, each of which is known for its sights and beautiful views. Don't know what to see in Puglia? Especially for you, we have compiled a rating of popular places in this region, which included the most interesting sights of Puglia.

What to see in Puglia in the first place

The most visited place in Puglia by tourists is the capital of Bari. There are several architectural monuments that are definitely worth a visit. For example, the castle of Bari, built back in one thousand one hundred and thirty-two. Since the castle has been worked on for several centuries, it combines several styles at once. During its existence, the majestic and powerful building managed to act as a defender from enemies, a prison with a barracks, and at the moment a historical museum, as well as a venue for various exhibitions and various cultural events. 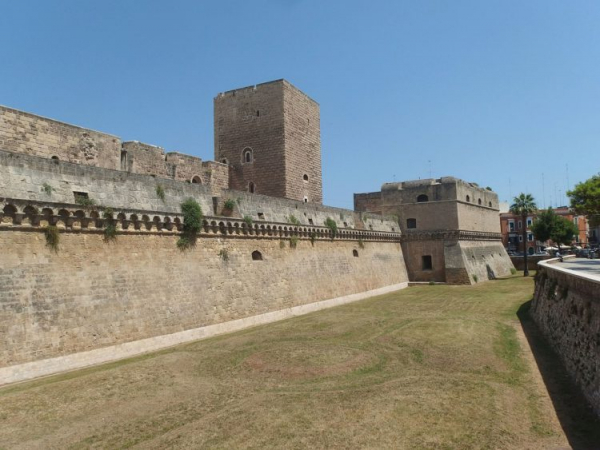 Bari Castle in the capital of Bari in Puglia Palickap

Basilica of St. Nicholas the Wonderworker

The main attraction of Puglia in Italy, the capital of this region of Bari, for which tourists come there from all over the world, is the Basilica of St. Nicholas the Wonderworker. Here, starting from the year one thousand one hundred and ninety-seven, his relics are located. Saint Nicholas is one of the most famous saints. This applies to both Catholicism and Orthodoxy. He acts as the prototype of the beloved and well-known Santa Claus or Santa Claus. Being young, he helped poor people in every possible way, and then in the city of Peace he was recognized as a Christian bishop, where his life ended in the year 343. The basilica looks very beautiful and majestic. The old building is somewhat similar to a medieval citadel. Inside is not only the tomb of the miracle worker, but also the tomb of Bona Sforza, the famous Polish queen who was born in these places, the throne of Bishop Elijah. The Lviv Portal looks majestic. It is worth coming to Bari just for this miraculous and unique place.

Tomb of the Queen of Poland Bona Sforza Porcullus

There is a Cathedral in the city called San Sabino, where the relics of Bishop Savin are located. The remains ended up in Bari in the ninth century. The modern building of the Cathedral makes an indelible impression. It was built between the end of the twelfth and the end of the thirteenth century. Previously, this place was the Cathedral of the Byzantine Empire, you can even see its remaining traces. During the reconstruction, the relics of the saint were located in the Basilica of St. Nicholas. The cathedral building itself is made in the Apulian-Romanesque style. The church is distinguished by a very strict interior decoration, perhaps only empores, the so-called stands, stand out. 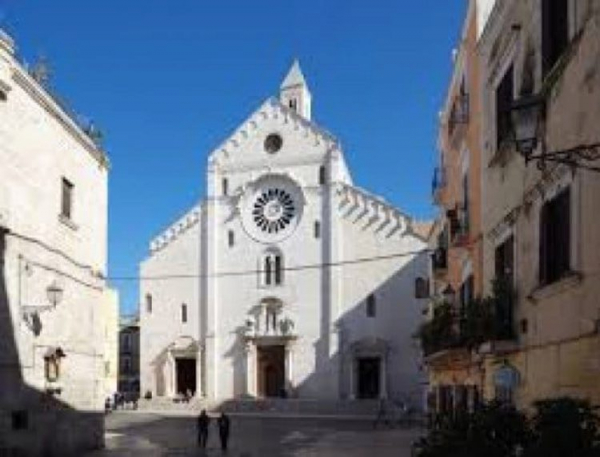 San Sabino Cathedral in Bari Berthold Werner Feel the atmosphere of Puglia in this beautiful video!

The hallmark of Puglia is undoubtedly the city of Alberobello, located in the very south of Italy. In translation, the name means “tree” and “war”. The fact is that for a long time there were whole oak groves here. Trees were actively used for the construction of reliable and powerful military mechanisms. This city is definitely worth a visit, here you can not only lie on the coast of the Adriatic Sea, but also provide yourself with vivid impressions. 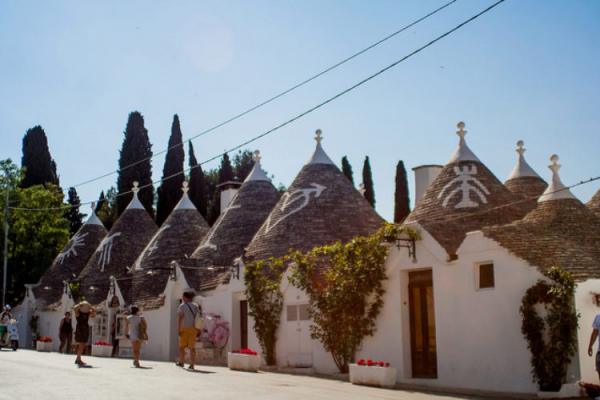 Trulla houses in the town of Alberobello in Puglia Mona Varga

Trulla houses, which are found nowhere else in the world, brought incredible fame to the city. For their uniqueness, they ended up in 1996 on the UNESCO cultural heritage list. Outwardly, they are cylindrical white-stone structures with a cone-shaped roof. They are built using dry masonry. The peculiarity of such houses is that by pulling out one stone at the base of the roof, it was possible to completely destroy the entire settlement. At the end of the seventeenth century, an earl decided to evade taxes, so it was decided to build houses that could be quickly and easily destroyed. Such houses have thick enough walls, which makes it easy to endure the heat. The light source is a single inlet. Everyone can see such a sight of Puglia in Italy. 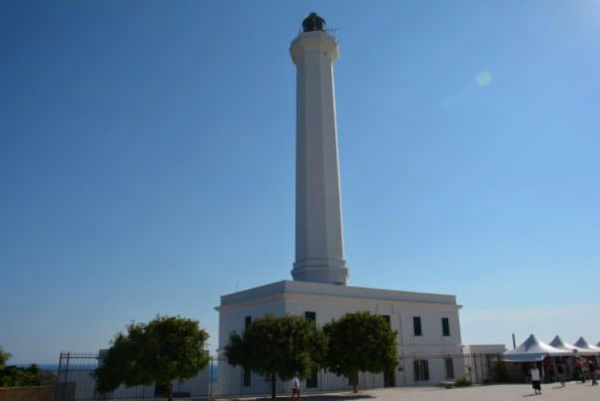 For those who love nature and incredible scenery, the delightful town of Santa Maria di Leuca is a must. It is the junction of two seas – the Adriatic and the Ionian. The very name of the city is translated as “white”, because in this place this color dominates everywhere. The tourist port in this town is one of the largest. The coast has rocky and sandy areas. It is interesting that stone pavilions that served for women are still preserved here. So, bathing, they were closed from men. The coast is interesting with mysterious and incredibly beautiful grottoes, which can be reached by fishing boats. Fans of legends and connoisseurs of beauty should definitely visit these places. Here on the cape is the lighthouse of Santa Maria di Leuca, opened back in 1866. The height is about forty-eight meters above the ground and one hundred and two meters above sea level. On the coast there are beautiful old villas built at the end of the nineteenth century especially for the rich. Also in the city you can visit the Church of Santa Maria de Finibus Terre, Tricase Forest and much more. 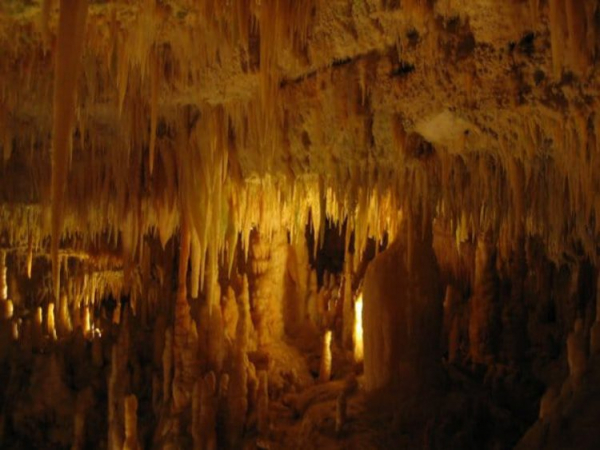 The karst cave of Castellana is one of the most majestic. In fact, the cave is a real underground labyrinth. Located one kilometer from the town of Castellana Grotte. The entrance to the cave itself is a tunnel sixty meters long. The entire length of this complex is about three kilometers. Karst caves amaze with a large number of stalactites and stalagmites formed over three million years. You can go through the entire system in two hours, during which time you can enjoy the stunning views. The Castellana Cave is one of the most beautiful caves in the world. Inside is a bust of Franco Anelli, the man who discovered and explored the stunning complex.

Puglia is home to one of the most mysterious and beautiful medieval castles in the world – Castell del Monte. In translation, its name means “castle on the mountain”, since it is located on a hill five hundred and forty meters high. The place is very beautiful, around lush vegetation, water. Unfortunately, little is known about the history of this building. It is known that the building was built for ten years. As the legends say, it was used as a hunting lodge, a prison, a shelter during the plague. The building itself has a unique design – the shape of a regular octagon. An octagonal tower was erected at each corner. Inside there is a courtyard of a similar shape. The building is two-story, each with eight rooms. For a long time the castle was abandoned. Restoration began only in the twentieth century, and since 1996 it was included in the World Heritage List.

The ideal family resorts in Puglia are undoubtedly:

Marina di Andrano, located in the province of Lecce. There are incredible rocky bays, pristine beaches; 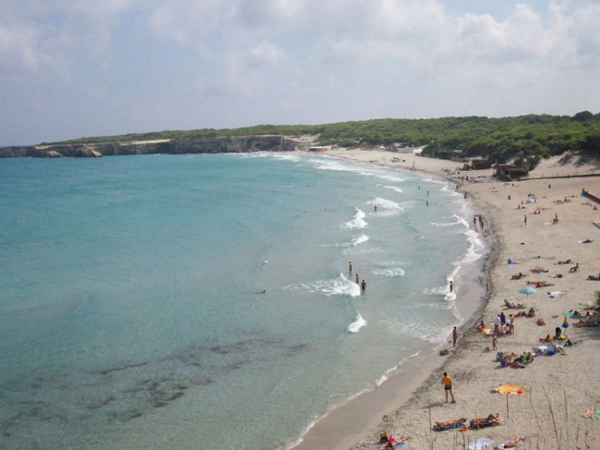 Gallipoli, and more specifically the snow-white beach of Lido San Giovanni, just two kilometers from the town of Foggia. The sea here is very calm; 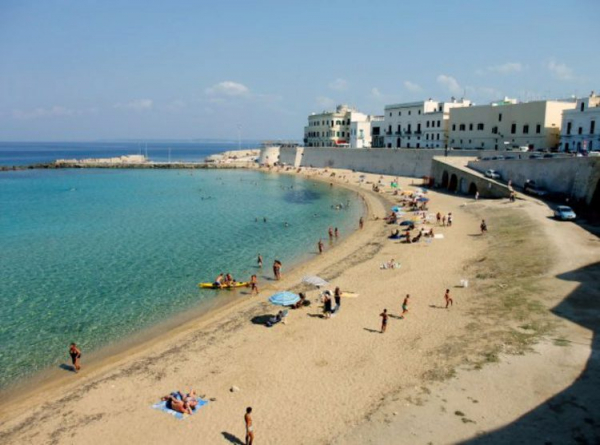 Margherita di Savoia, famous not only for beautiful and cozy beaches, but also for healing thermal baths. 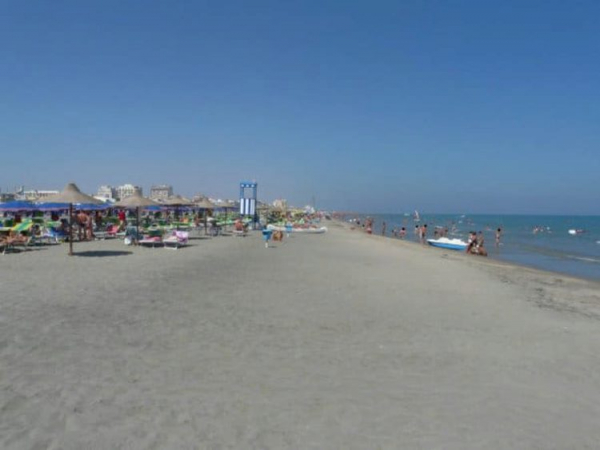 These are just a few of the attractions of beautiful Puglia. Explore the delightful provinces with the whole family. Majestic cathedrals, stunning capes, karst caves, beaches, bays, cuisine – this is not all that this region has in store for its tourists. Read also about the sights of Bari and be inspired to travel further in Italy.