The well-known resort of the southern Crimean coast in the picturesque valley of mountain rivers – Alushta, annually attracts many tourists with sights and entertainment. This seaside town has a pleasant climate, which ensures the movement of air currents on mountain passes, which significantly soften the hot summer days. The cleanest sea, gentle sunshine and comfortable beaches will make your stay at this resort unforgettable. 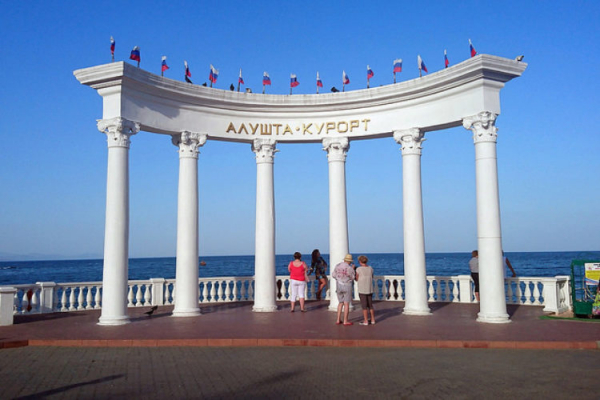 Rotunda with the inscription “Alushta – resort” in Alushta Vahe Martirosyan

Beach holidays are not the only leisure option in the town. There are sights on the map of Alushta that are impossible not to visit. The resort has many unique and favorite places for tourists, and the comfortable location of the town makes excursions in Alushta very accessible to everyone. Numerous sights of Alushta will allow you to take photos from unusual angles, as well as acquaint you with the most interesting historical facts of this resort.

Historical sights: what to see in Alushta?

Going on a city tour, you should definitely visit the historical center and look at the ruined fortress of ancient times Aluston. Until our time, only the huge Ashaga-Kule tower could survive. Its height reaches 16 m, and its diameter is 8 m. It was created to close the defending southern line. This is the oldest landmark of Crimea and Alushta, as well as a state-level monument.

When thinking about where exactly to visit the city, be sure to include the Open Air Museum or the 14th century “Funa Fortress” in the excursion program. Earlier in this area was the fortress of Theodoro, erected during the Middle Ages. It collapsed due to an earthquake, but survived:

This most interesting attraction will certainly be of interest to all connoisseurs of archaeological finds. There are also unusual places in the resort, one of which is the Church of All Crimean Saints and Theodore Stratilat. The structure of the cathedral has unique features – it was built in the style of English rural churches with some Gothic details. The building began to decorate the city, as it favorably distinguishes it from the mass of buildings: 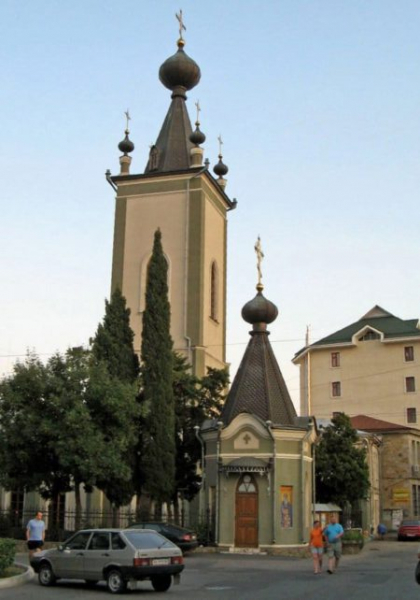 The interior used to include twenty festive icons, as well as an iconostasis made of linden. The building, which was significantly damaged in the process of revolutionary and military actions, today underwent restoration and consecration.

A tour of the sights of Alushta should definitely include a visit to a beautiful two-story mansion, which is decorated with an elegant snow-white colonnade. It is located on the embankment and is surrounded by a picturesque park area. The building was erected at the end of the 19th century and was intended for the famous gold miner and philanthropist N.D. Stakheev. Elements of Art Nouveau and European classics were used in the architectural design of the building. The landscaped park area surrounding the mansion was ideally inscribed in the environment, which contributed to the preservation of the century-old plane trees growing here. An interesting feature of the estate is the absence of a fence that closes it from the embankment, so everyone walked along the park alleys of extraordinary beauty.

The city of Alushta is also rich in museum attractions. When planning a vacation at this resort, do not forget to visit the Alushta Museum of Local History. Its extensive exposition consists of more than 6500 exhibits that tell about all periods of the history of the town and the Crimean peninsula. This institution carries out active scientific and educational work, through the systematic organization of exhibitions and lectures on various topics.

The Alushta Museum of Nature offers a fascinating journey into the flora and fauna of Crimea. Numerous are exhibited in its halls:

schemes for the development of evolution; the rarest and endangered species of flora; animal layouts.

This museum will be interesting for children. They will be able to get acquainted with the fascinating natural diversity of the Crimea.

Thinking about what to see in Alushta from the sights, stop your choice at the Beketov House-Museum, which is a famous scientist and architect. The building is decorated with an openwork veranda, and in the halls there is an exhibition of personal belongings, photographs and paintings belonging to a great talent.

Of the most popular places where you can relax with your family in the resort, guides in Alushta suggest visiting:

miniature park – here are all the most important Crimean sights of a cultural, historical and administrative nature on a scale of 1:25. There is also a children's corner where kids can play and take photos with their favorite cartoon characters; 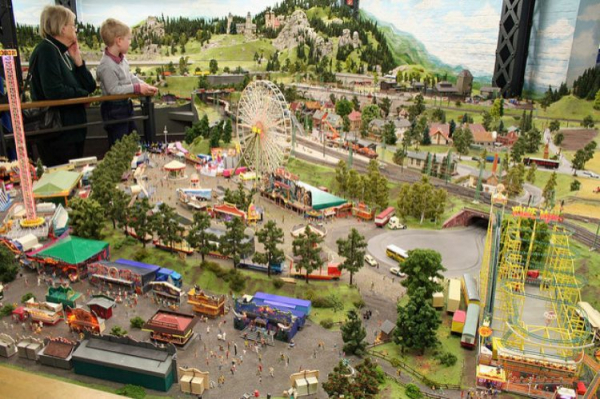 Alushta Aquarium – in four halls you can see over 250 species of fish that live in sea and fresh waters around the world. There are also crocodiles, turtles and crabs. In addition, there is an exhibition hall displaying many varieties of corals and shells;

Dolphinarium “Nemo” – is located not in the town, but in its vicinity – Partenit. In addition to the show performance, it is proposed to pay extra for a session of swimming with dolphins or dolphin therapy; 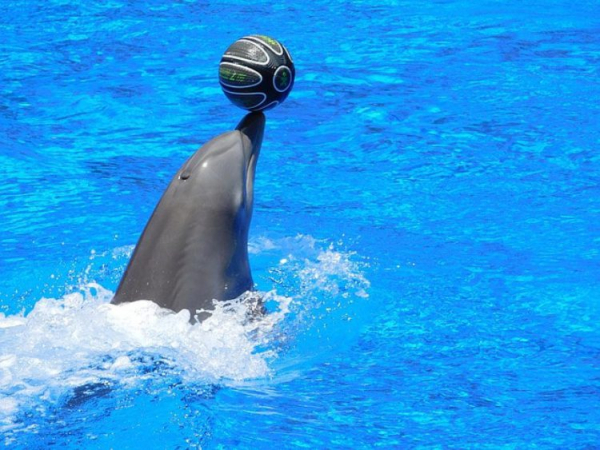 Show performance in the dolphinarium

The water park “Almond Grove” is the best attraction and entertainment in Alushta and the Crimea. Since there are all conditions for relaxing in comfort: six modern swimming pools, four ski platforms, numerous water slides, as well as many waterfalls, fountains and jacuzzis. This water park is distinguished by the features of a developed infrastructure, the most beautiful landscape design, which combines artificially created rocks and a reservoir.

In order to not only relax on the beach while traveling to the sea, but also to learn a lot of interesting things, it is worth seeing the sights of Alushta in advance with a photo and description. Then make a comfortable route for yourself.

Natural attractions in the city of Alushta

In the resort and in the areas closest to it, you will see many magnificent miraculous monuments. Of the most famous such places, the largest waterfall on the peninsula, Dzhur-Dzhur, stands out. It got its unusual name because of the sound of water. The Ulu-Uzen River, falling in the widest streams from fifteen meters in height, rushes down with tremendous speed through dense natural forests to the Khapkhal gorge. Climbing up the river, you can admire two more waterfall cascades, the height of which reaches up to thirty and sixty meters. Not far from here is the karst cave Dzhur-Dzhur, its length is seven hundred and fifty meters. These are all the famous sights of Alushta and its environs. 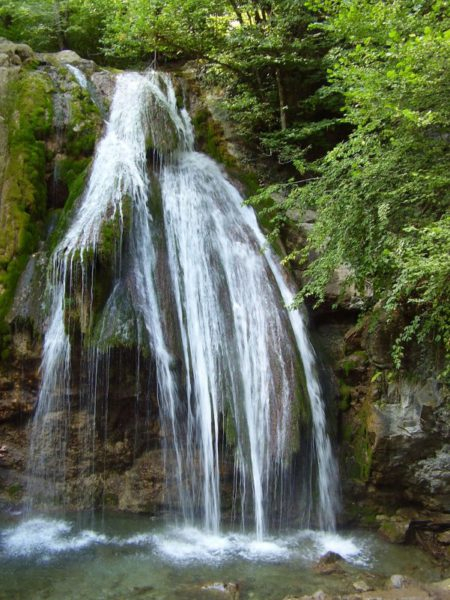 The waterfalls and the gorge of extraordinary beauty are part of the Khapkhalsky nature reserve, where you can look at many oaks, beeches and large walnuts. Picturesque glades will delight you with a variety of bushes and blooms.

The most interesting and unique natural places of the resort are “Stone Mushrooms”, located in the valley of the Sotera River. Against the background of this sight of Crimea and Alushta, the photos will turn out to be truly unusual and original, since this area is decorated with stone blocks, the shape of which is similar to mushrooms. Moreover, such rocky formations are still being formed today under the influence of natural phenomena.

Summer cafe by the sea in Alushta Roma Neus

Looking through the map of the city of Alushta with sights, you will see how many there are various places for cultural recreation and entertainment, so neither adults nor children will be bored at this resort. There are a huge number of memorable places here, which means that taking air baths under the gentle sun on the beach can easily be combined with educational walks and excursions.