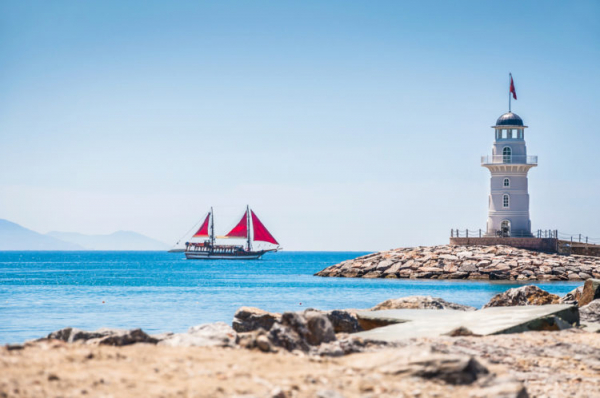 Among all Turkish resorts, Alanya can rightly be called the most unusual, charming, memorable and amazing. Here you will find the cleanest beaches, azure waters of the sea, the gentle rays of the sun and, of course, breathtaking diving, marvelous beauty of underwater caves, archaeological and historical treasures in the form of ancient cities built by the Greeks, and a lot of other entertainment. If you are dreaming of a fabulous vacation that can give you an unforgettable experience, then do not even doubt that you are making the right choice. Don't know what to see in Alanya? Especially for you, we have compiled a list of popular places in this Turkish city, which included the most interesting sights of Alanya.

Alanya sights: what to see first

You will find Alanya with sights on the map of Turkey in the province of Antalya, on the Mediterranean coast. Today it is one of the largest resorts in the country, which is at the same time a seaport. Directly from the city of Antalya, it is separated by 138 km in a southeast direction.

Summer here is hot and long, rains are rare, but at the same time the climate remains mild and favorable for a great holiday. Winters are rainy and windy, but quite short.

Panorama of the city of Alanya Killikundak

The resort infrastructure is well developed in the town, many hotels of different levels, comfortable beaches, entertainment and, of course, Alanya in Turkey offers an abundance of attractions and souvenir shops, and the recommendations of tourists will help you plan your vacation so that you we spent a minute of our time in a fun and useful way. 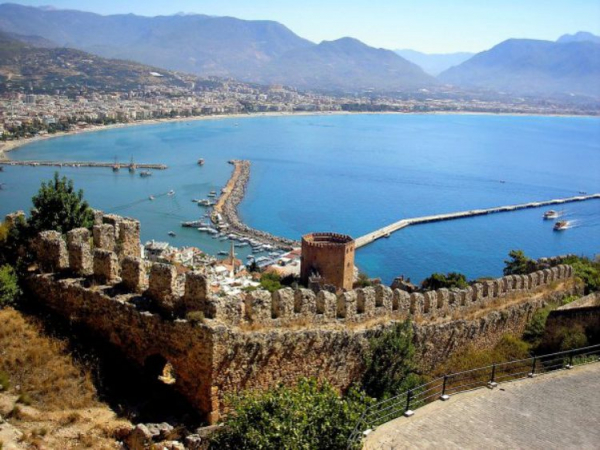 Medieval fortress in the city of Alanya Seleonov

One of the must-see places to visit during your vacation is the medieval fortress, which at one time served as protection for the city. Once the total length of its walls was 8 km, and along their length there were 160 observation towers. Inside there was a mint, the Sultan's palace, a mosque, but, unfortunately, they did not survive, but the fortress walls show their reliability, having survived to the present day. Also, in all its splendor, you will see the Red Tower, which is part of the historical complex of the fortress. 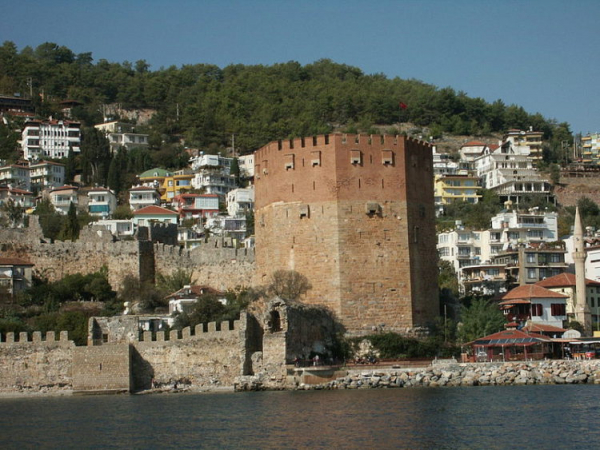 The Red Tower is a real historical value, which was erected in 1225 in order to protect the city from pirate raids, and today it is a large open museum, which is a reminder of medieval architecture. The height of the building, which has been preserved for several centuries, is 33 meters, at the top there is an observation deck from which you can look at the surrounding beauty from a bird's eye view and take amazing photos as a memory of this attraction of Alanya in Turkey. Climbing up, you will have to overcome 85 steps, but along the route you will have a better view of the observation windows and loopholes. Be sure to check out the Museum of Ethnography located on the ground floor. This fortress can be safely attributed to the best sights of Turkey. 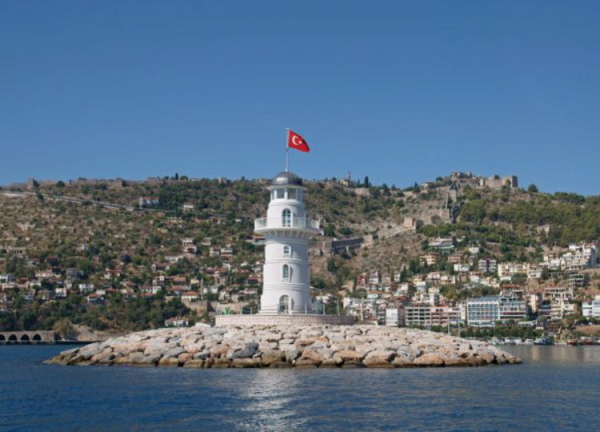 Nearby is another interesting building – a lighthouse, which is a monument to the mighty Ottoman Empire. The snow-white building was originally made in France (in 1880), then dismantled and transported to the Turkish Mediterranean coast. Despite the fact that the lighthouse itself is small, the light from it spreads to a distance of 200 miles.

Feel the atmosphere of Alanya in this beautiful video!

The list of the most valuable sights of Alanya will not be complete if the local Archaeological Museum is not included in it. There are so many unique finds and objects in it that some of the expositions do not fit in the building and therefore are located in the courtyard. There are many artifacts, ancient writings (including the handwritten text of the Koran), objects and clothes, coins and weapons. Among the exhibits is a Phoenician stone, the inscriptions on which date back to 625 BC, as well as a tombstone dating back to the first century BC. 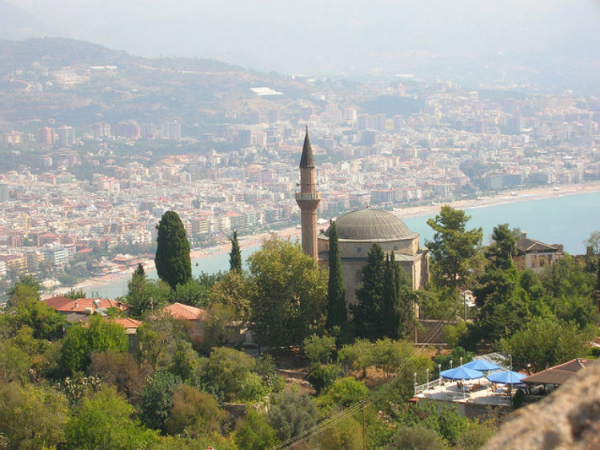 Suleymaniye Mosque on the Castle Hill of Alanya Rene MT

The Suleymaniye Mosque, which you will find near the Byzantine fortress, is called the architectural value. This building is made of stone with wooden windows and gates, which are decorated with very beautiful carvings, it has a square shape and consists of only one minaret. The uniqueness of the building is that to ensure first-class acoustics (which was too difficult to obtain in the Middle Ages), 15 balls are suspended under the dome itself. This mosque is active, it begins its history in 1231, although the first building was destroyed and was to be restored only in the 16th century, but here it is, just safely survived to this day. 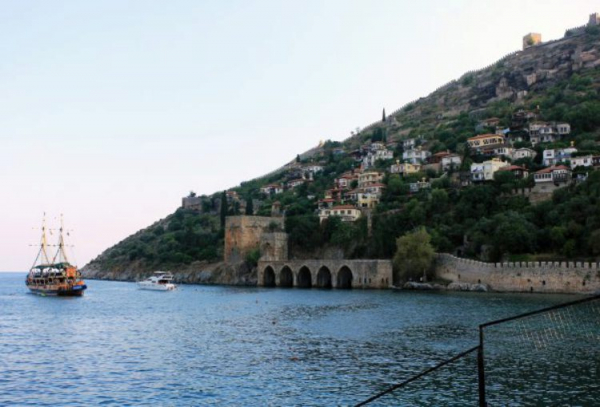 When exploring popular attractions and things to see in Alanya in Turkey, tourists always choose the shipyard (Tersane), whose history goes back to 1228, during the reign of Sultan Aladdin Keykubat. Ships have moored here for centuries, they have been repaired, and today the shipyard, the size of which is 56×44 meters, accepts small ships and boats. Tersane is especially beautiful at dusk, when bright lights illuminate it.

Not a single photo or description of sights in Alanya in Turkey can convey to you a share of the impression that will bring visiting the mysterious caves: 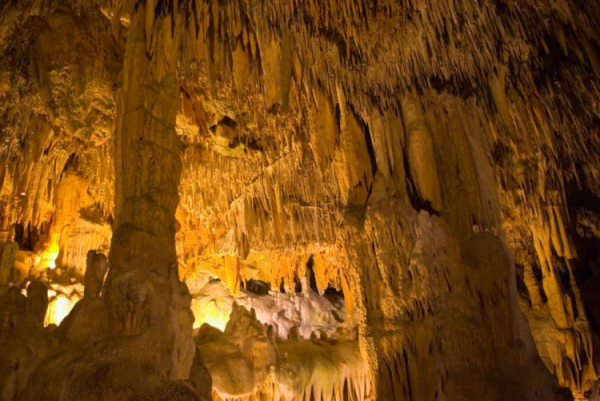 Damlatash is the famous and most visited of all, it has an unusual, healing microclimate, therefore it is useful for people with respiratory diseases. Inside, you will see stalagmites and stalactites, the estimated age of which is about 15 thousand years.

Karain Magarasi is the largest of the country's natural caves, it is also attractive because ancient people lived here, somewhere around 25 thousand years ago. There is a small salt lake in Dim Magarasi. 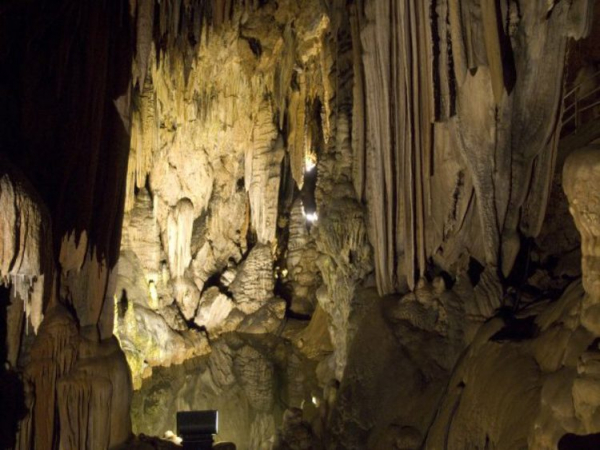 If you decide to leave the territory of the resort town for a while, then just seven kilometers from it, near the village of Elekesik, you will find the ancient city of Hamaksia. It has a stone pool with centuries of history. The pool is replenished with water exclusively from mountain streams, and real historical monuments of the Roman and Byzantine period, represented by unique structures. 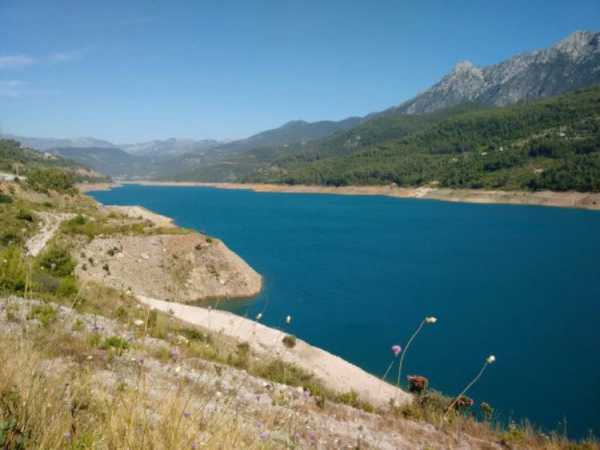 Reservoir on the Dim Chay River in Alanya HylgeriaK

You can diversify your holiday program by visiting the valley of the mountain river Dim Chay. Despite the fact that swimming in the reservoir is not allowed, natural beauties will leave enough impressions, which you can also admire even from a height, climbing to the observation deck.

The Turkish resort offers holidays for every taste, and here it will be interesting not only for adults, but also for children. When you go on holiday with the whole family, take some time to visit Sealanya Park. Waiting for you here:

a water park, where, in addition to slides, there is amazing entertainment in the form of diving to the seabed (you will see grottoes, unprecedented anywhere else shells and not only); a fascinating water attraction called “Slow River”; dolphinarium, where performances with sea lions and seals are held daily, and you can also swim with dolphins. 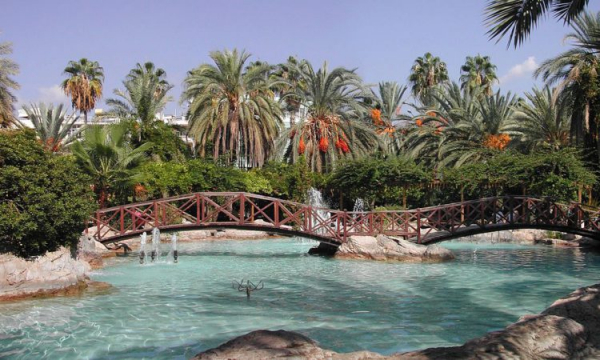 A visit to the Viking yacht will give a lot of pleasure to the little guests of the resort – this is a real pirate ship, on which professional animators have prepared an unforgettable experience for the kids adventure. But the show can only be ordered through a tour operator.

Just like adults, children are interested in routes with visits to caves, a fortress, a shipyard and, of course, water activities.

In fact, the resort is amazing, and it can be safely called the “Turkish pearl”. It is not like Istanbul or other cities, it offers a huge selection of tourist routes, amazes with the beauties of nature and the gentle sea. Alanya has many attractions, hotels, from Green Garden, which has 4 stars, to small cozy two-star hotels, beaches and entertainment. This is exactly the place on the map that cannot be missed! Read also about the best sights of Kemer and get inspired for your further trip to Turkey.