If the coast of Bulgaria is still unexplored for you, go on a short trip, which will undoubtedly surprise you. The Black Sea resorts of this country are imbued with a special atmosphere of fishing towns with old streets and colorful buildings, and the modern world has brought comfortable hotels to their landscape. You should not look for a measured rest in the most popular cities, choose the golden mean – it can be found in Sozopol, where there is everything for a budget, but comfortable stay, and the locals are less spoiled by tourists. 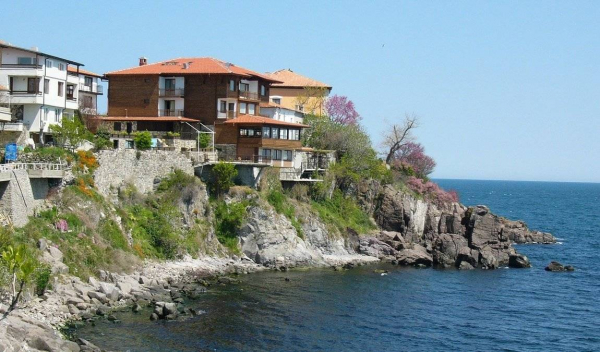 Holidays in Sozopol in June: wonders of the coast

Reviews of the holiday in Sozopol in June are positive – all tourists coming here are captivated by the local beauty. Still, because the resort has such beautiful beaches that you begin to doubt the expediency of calling the Black Sea black – The azure water of the coast makes you feel like you are in some exotic resort. Moreover, Sozopol in June has a number of advantagesbesides picturesque views:

But, unfortunately, Sozopol in June has some minuses:

< li>The first couple of weeks of the month the sea is still cool for swimming, especially for children. You will have to be content with swimming pools, so during this period it is not bad to settle in the Via Pontica area. There is no direct access to the sea, but it offers a gorgeous view from a hill, and all hotels and villas are equipped with swimming pools.

Weather in Sozopol in June

Weather in June – July fills the resort towns of the coast with vacationers: tourists from nearby countries, Bulgaria itself and the European Union flock here. The weather in early June is good for sightseeing holidays. Since the sea is still cool, travelers with children arrive later. The temperature in Sozopol in mid-June makes the water suitable for swimming – then the beaches of the resort are also filled with vacationers. With the increase of the summer season, the probability of precipitation disappears. Of all the summer months, June is considered the rainiest, but in fact, if during this period it can drip a couple of times, then nature completely forgets about the existence of clouds. Therefore, the weather at the end of June becomes dry and hot.

The dry climate of the resort causes high summer temperatures. However, the first half of June is quite acceptable for long walks without hats. But then the solar activity increases and it gets really hot.

The temperature in Sozopol in June is the most comfortable for the whole summer – during this period, you can enjoy not only a beach holiday, but also nature and historical sights, and there are many of them. An alternative to sea bathing at the beginning of the month can be two water parks located in the vicinity near the city.

Back to news | Therefore, this month it is worth stocking up on a pair of warm clothes and closed shoes – it will be cold to take evening walks in beach shorts.

But you can count on the heat of the day only from the second half of June, or even by the end of the month. Tourists who are focused exclusively on a beach holiday should come to the resort later.

Water temperature in Sozopol in June

The water temperature in the sea has an average monthly indicator of about +21*22°C. However, it does not warm up to such marks until mid-June. Before that, it will be cool even for seasoned holiday-makers to swim.

In the last days of the month, the sea will warm up by literally one more degree, and then it will become more or less comfortable for adults and school-age children.

June is considered the wettest month of the summer with ridiculously little rainfall – about 38.5 mm. So you don’t have to worry about bad weather, just like taking umbrellas or raincoats on the road. Summer on the Black Sea coast of Bulgaria is quite dry, it will not disturb vacationers with a sudden downpour. If precipitation does fall, it is so fleeting and small that you won’t even have to leave the beach.

June closes the top three sunniest months of the year. There are about 24 of them in 30 days. As a percentage, nature ordered this: 80% of June is clear and sunny weather, 17% of the month the sky is covered with clouds, which happens most often in the first days, as well as the remaining 3% of bad weather.

Usually, the vagaries of heaven are typical for the first week of June, and already from the second, nature throws all its strength into warming up the depths of the sea.

In early June, you can not ignore the local amphitheater – it is much more modest than its Roman counterpart, but even now it pleases the audience with the performances taking place within its walls. Of course, these are not gladiator fights, but the audience takes all the empty seats – Sozopol hosts a string of various holidays and concerts to the delight of the local and visiting public. Children will like visiting water parks more, in the vicinity of the resort there are two – “Aquaplanet” and «Duni», but you will have to drive to both.

The old part of the city will delight architecture lovers with ancient buildings and religious buildings of bygone years – it is especially good to stroll through the narrow streets in the middle of June, before it gets too hot.

In such places you begin to feel the spirit of mighty Thrace. Perhaps the famous Spartacus once walked along these same paths, making the great Rome tremble.

Many entertaining attractions are located in the vicinity of Sozopol. For example, Ravadinovo Castle, a unique modern complex in the style of Byzantine architects and Gaudi himself, is still under construction. A lush park with swans on a pond and luxurious gazebos are available to curious visitors who want to take a walk under the crowns of dense trees on a hot day at the end of June.

Festivities in Sozopol almost never stop in June. Beginning in May, the Sozopolis Festival blends seamlessly into Children's Day, which is universally celebrated along the coast. Then – children's competition “Joy on the Beach” with its sand castles, Old Town Song Festival, “Black Sea Evenings”, “Marine sink» – here is a partial list of holidays held at this resort in June. The walls of the amphitheater, the noisy embankment and numerous institutions of the city will gladly meet those wishing to join the general celebrations.

Prices in Sozopol in June are much lower than in subsequent summer months, – the season has just begun, there are few tourists, and the sea has not yet warmed up. If you are traveling without small children, a trip in the middle of the month would be a good option to save money and go for a swim, when the cost of everything has just started to rise, and the water has already warmed up more or less.

Before the nearest airport in the city of Burgas must be reached by plane. The flight will cost 15–20% cheaper compared to May and 5–7% more expensive than in July. From here you can get to the resort by taxi or bus. If you have a lot of things, then the first option will be preferable, as a car will be able to take you to the door of the hotel, unlike buses, which are prohibited in Sozopol.

The cost of tours in June is much lower than in July. On average, this difference is as much as 30%, since Sozopol is still a seaside resort and most tourists are attracted by the warmer sea period that begins in July. June is also not worth choosing for travelers with very young children, for obvious weather reasons.

Food in Sozopol cannot be called expensive compared to the more popular and popular coastal cities. To eat well without doing your own cooking, you should expect at least 7-8 euros per person per meal. Somewhere it can turn out more expensive, somewhere cheaper. For example, you can eat the first meal in an inexpensive cafe for 5 euros, and a plate of seafood in a mid-range restaurant costs about 15 euros.

Recommendations for families with children

In June, a trip to Sozopol with small children – not the best idea, because you can’t swim in the sea yet, and it’s quite cool in the evenings. Regarding a beach holiday, the resort is an excellent choice for parents with children – there are many beaches with clear water, fine sand and a smooth entry into the sea. But there is not much entertainment for children. But swimming is really safe – in Sozopol, active water activities like bananas and catamarans are prohibited. Thanks to this, the water is calm and transparent, like a tear, and there is no smell of fuel and exhaust in the air.

It's worth a trip to Sozopol and see that the perfect pictures of a sea holiday from catalogs really exist and are not so far away.

See also  The best bays of Sharm, where it is always cozy and calm