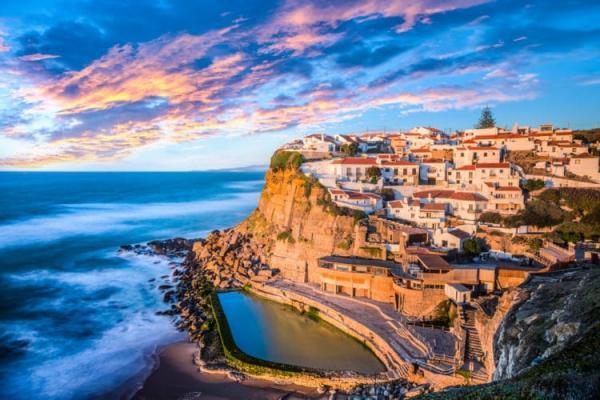 After reading our review, you will find out what any curious tourist should see in Sintra. We will tell you about those sights of Sintra that will make your trip to the hospitable Portuguese city unforgettable.

What to see in Sintra in the first place

Make a rating that would include all the interesting places in Sintra , is simply impossible. Therefore, in our article we have included only those excursions in Sintra that are most successful:

Pena Palace on a high cliff above Sintra

The palace is located in a beautiful park with centuries-old trees and exotic plants, on top of a cliff. The building was erected in the 19th century in the architectural style of European romanticism. In his appearance, the features of “Manueline” are visible. Special attention deserves the magnificent interior decoration with neo-baroque, neo-renaissance and gothic furniture. No matter how long your trip to Sintra is, take the time to explore this castle. 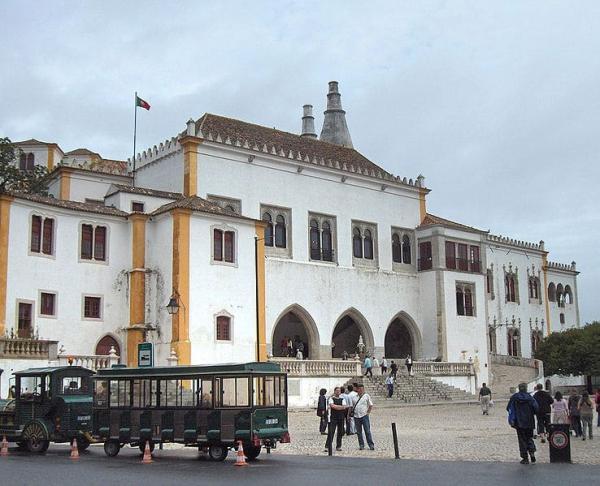 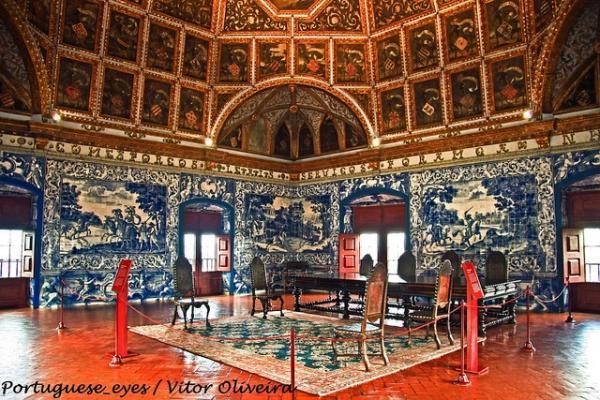 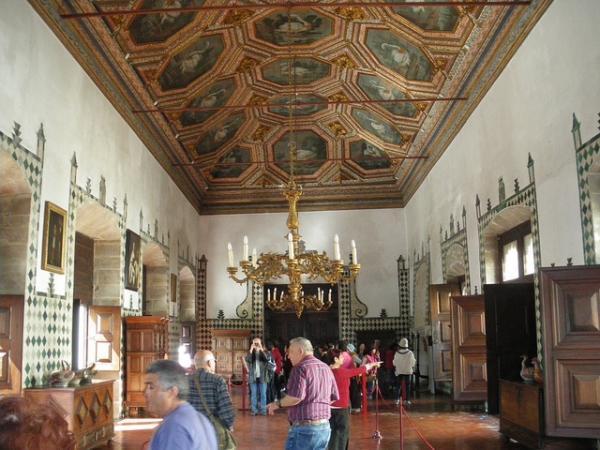 Like many other sights of Sintra, this one is located in the historical center of the city. For many years the palace was the property of the royal family. Visitors are invited to view the building inside and out. Of great interest are: a chapel with wooden ceilings and a tiled floor, a heraldic hall, a hall for receiving foreign guests and the Swan Room (the largest room in the palace, the ceiling of which is decorated with gilded swans). 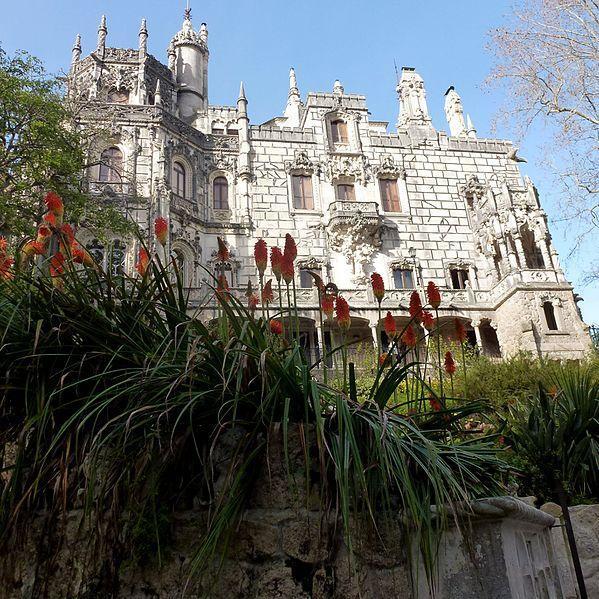 The complex includes a chapel, a park and a mystical mansion. Inside the cottage, surrounded by a garden, you can see ancient frescoes, original sculptural compositions and fireplaces decorated with unique carvings. The villa has a secret passage with a whole tunnel system running under the park. Once upon a time, mysterious masons, great alchemists and Templars walked through these tunnels. Guides in Sintra recommend visiting such fascinating places in the first place. 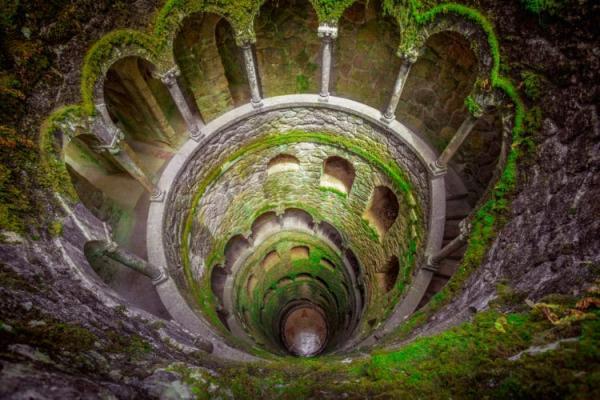 The object is located in the park, and is a vast well – a real stone tower, but not going up, but down. The well has flights of stairs and arches. The meaning of the construction is symbolic – the connection of earth and sky. At the top of the well – in the “sky”, a person acquires goodness and light, at the “bottom” – in the lower part of the tower, he is in darkness. Traveler reviews about visiting the well are invariably enthusiastic. 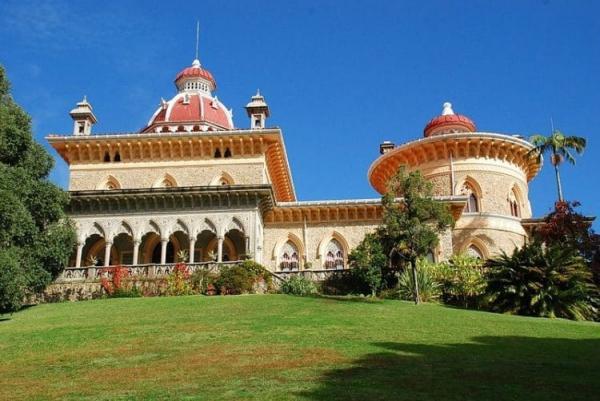 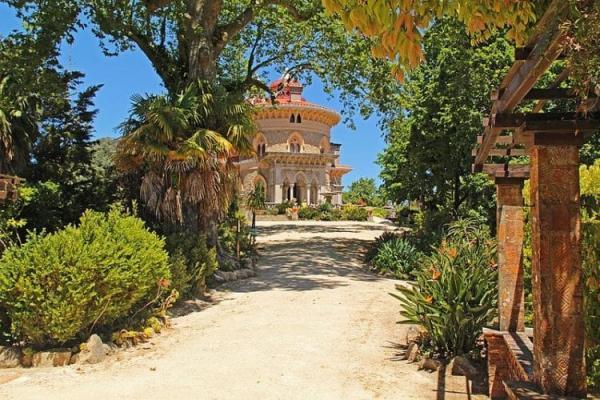 Both objects were created in the Moorish style in 1790. The castle, similar to a casket from Arab legends, received its current appearance in the 19th century. The palace is beautiful not only from the outside, but also from the inside. The interiors are represented by colorful stucco on the ceilings, arches with lace decor, and elegant carvings on the walls. The complex includes several lakes, a waterfall and a rose garden. Trees and shrubs from around the world grow on the territory.

Watch the wonderful views of Sintra in this fascinating video!

View of the city of Sintra from the walls of the Moors Castle Concierge.2C

If you don't know what to visit in Sintra, but are passionate about history and architecture, come here. The fabulous palace rises at an altitude of more than 400 meters above sea level, on top of a hill. The construction of the structure began as early as the 10th century – at the time when the island was successfully attacked by the Moors. Climbing to the highest points of the fortress, you can see not only the whole city, but also many sights of Portugal. 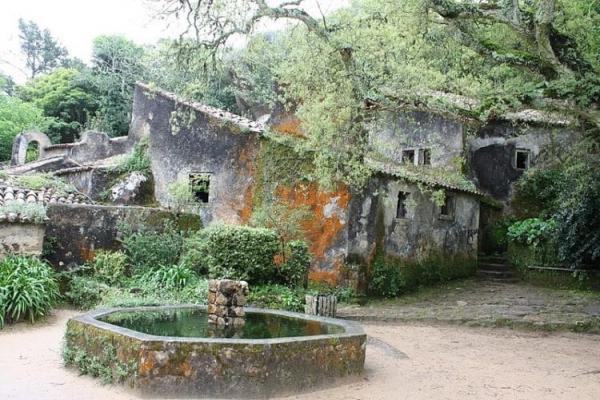 The temple is located ten kilometers from the central part of the city. It was built in the middle of the 16th century, choosing a strict ascetic style, characteristic of everything related to the Capuchin order. The monastery makes an interesting contrast to the chic castles of Sintra. Visitors can view both household and residential premises. But let's say right away that at present the monastery of monks is in desolation. The interiors of the sanctuary are designed to show that comfort is not a big deal in life. The bed for sleeping is extremely narrow, no frills in the design of utility rooms and cells. 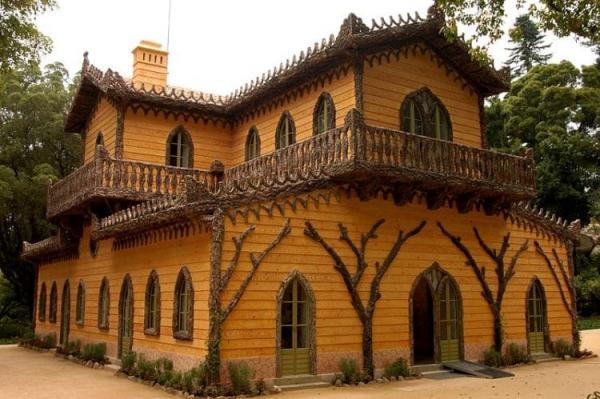 Villa built in the spirit of the Swiss Alps. In its design, it also somewhat resembles a traditional Russian tower. The customer of the chalet was Fernando II. The Duke decided to present the mansion as a gift to his wife, a famous actress and operetta singer. The front part is interesting, first of all, with an unusual terrace on the second floor. In 1999, the building was almost destroyed by fire. However, a decade later, the city authorities decided to reconstruct it. Not far from the attraction (within walking distance), there is Pena Park. You can combine these two attractions. 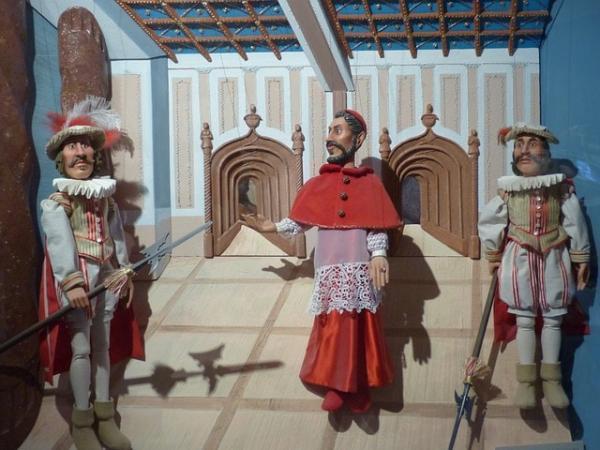 Dolls from the Puppet Museum collection 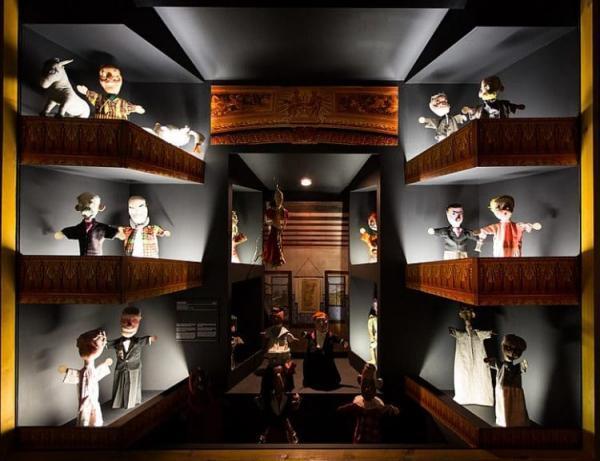 The largest collection of toys dedicated to the history of puppets and puppet theaters. The number of exhibition samples is over four thousand exhibits from more than 30 countries of the world. The Puppet Museum often hosts puppet shows and workshops where you can make your own puppet. For those traveling with children, the museum has a playroom where kids can play with dolls and become part of the performance.

What to see in Sintra in 1 day if you are passionate about fine arts? Of course, this museum, most of the exhibits of which are masterpieces collected by the billionaire collector J. Berardo. The complex is housed in an Art Nouveau building that used to house a casino in previous years. The collections include art objects created in the 20th century in the post-war period. The most valuable specimens are the creations of Bacon, Warhol, Polok.

Sintra attractions: what else to visit in Sintra

We told you about the main attractions of Sintra briefly. And our recommendations do not end there. The list of places to visit in Sintra should also include:

Since 009, the museum complex has been operating in the old part of the city, and is located in a building of the 20th century. The permanent exhibition is based on exhibits collected by the Barbosa family. For several decades, the famous scientist and his wife have been collecting minerals and fossils in various parts of the world. Now the number of items they have chosen is over 10,000 units. The collection is recognized as a scientific and cultural value. In addition to the permanent exhibition, temporary exhibitions are organized. 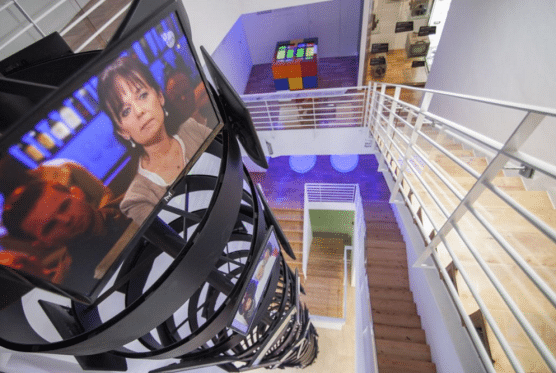 When listing the best attractions in Sintra, we should not forget about this rather unusual museum. He started his work only two years ago. guests of the complex are invited to get acquainted with the history of the emergence and development of the media, learn interesting facts about Portugal, covered by journalists. 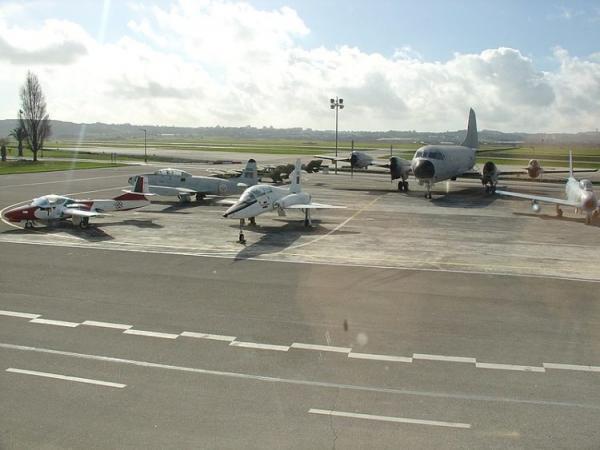 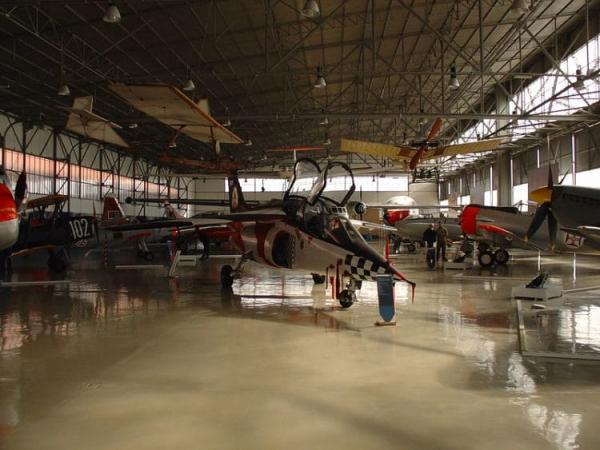 The building is located on the National Mall and belongs to the Smithsonian Institution. The largest exposition of spaceships and aircraft of various eras has been collected on a vast territory. Almost every sample is a real historical copy or a perfect copy of an existing air or space vehicle. Even if the purpose of your trip to the city is, for example, shopping in Sintra, you must come here.

Since the beginning of the 20th century, Praia das Masansh and Sintra have been connected to each other by a tram line 13 kilometers long. The tram makes 8 stops along the way. There are many shops, attractions and hotels in Sintra along the way. Therefore, the journey can be not only interesting, but also useful. Leisurely trips in one of the 11 original trailers are mainly of interest to tourists. The locals prefer the bus. 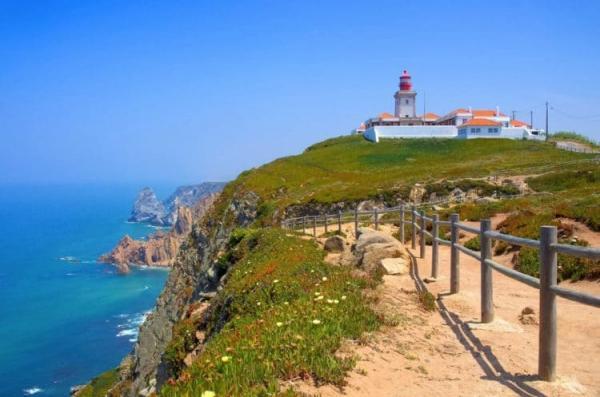 Lighthouse at Cape Roca in the Sintra-Cascais National Park

The western part of the European continent, which is reminiscent of a cross rising on a pedestal. In order to get from the city to this cape, it is necessary to overcome almost 20 kilometers. However, the effort is worth it: incredible views of sheer cliffs, mountain peaks and the entire Atlantic open up from here. One of the local attractions is a beautiful lighthouse. Roca is accessible by public transport. There is a small office on the territory where you can purchase a “certificate” that provides a stay on the cape. There is also a post office, by visiting which you can send a letter with the appropriate return address.

We hope that those sights of Sintra, the photos with the names and descriptions of which you have just seen, aroused your interest, and you would like to visit them personally . Read also about the sights of Porto and be inspired to travel further in Portugal.