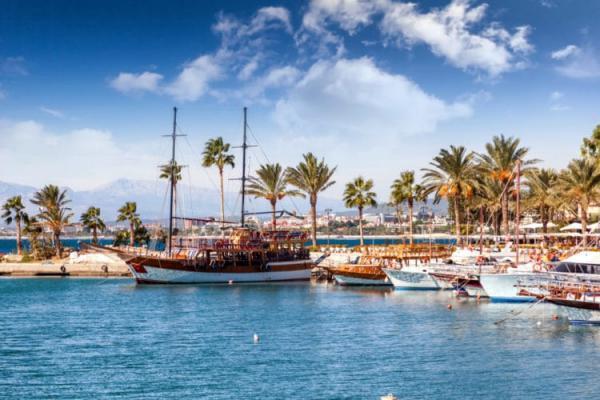 Not sure what to see in Side, but have already planned a trip to the hot Turkish city? Then read this review. We will tell you about those sights of Side that every tourist must visit.

What to see in Side in the first place?

It would be endless to list all the interesting places in Side. Therefore, we have included in our rating only those attractions that are most popular with vacationers: 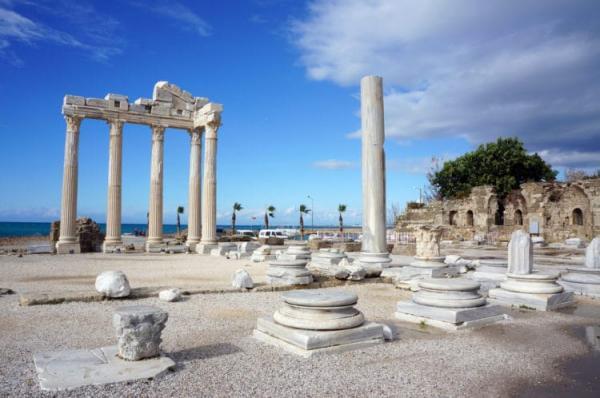 The picturesque remains of the main temple of the ancient city, dedicated to the sun god Apollo. Together with the ruins of the temple of Athena, they create a unique historical complex. The date of construction of both objects is the 2nd century BC. Partial restoration of the Sanctuary of Apollo was carried out at the end of the 20th century. You can see such sights of Side for free. 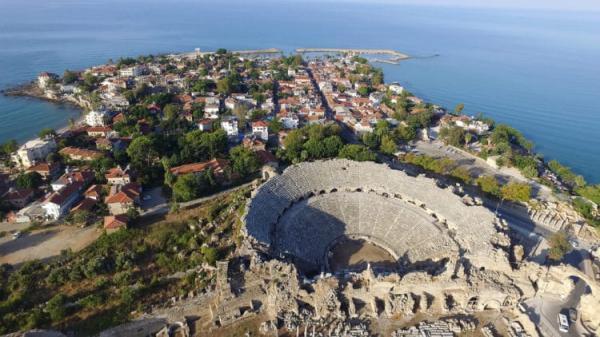 The date of construction assumed by historians is the time of the Roman Empire. In those distant years, the now famous Turkish resort was part of a vast trading colony. The object has come down to us relatively intact. The stands of the amphitheater, made of stone, can accommodate two tens of thousands of guests. If you do not know what to see in Side in 1 day, but are passionate about ancient architecture and history, come here by all means.

Another great option for what to visit in Side is the ruins of a defensive fortification dating back to the 2nd century BC. Over the course of a huge number of years, the structure was repeatedly destroyed and reconstructed. For this reason, now it looks like a majestic complex of separate structures of different times. 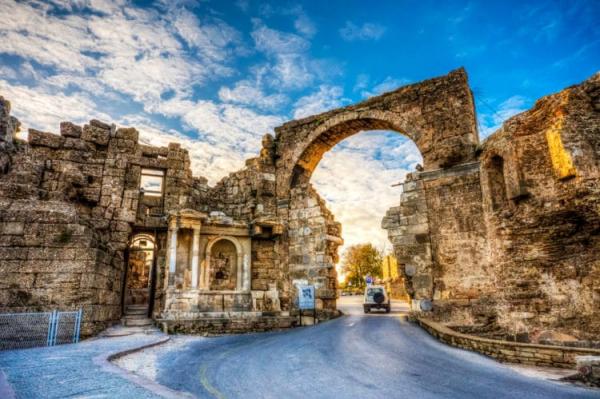 The main street of ancient Side begins from the Arched Gate

The age of the attraction is 2000 years. The building rises to a height of six meters. The walls have niches in which sculptures of noble and famous Turks are placed. From the arched gates, the famous columned lanes begin, more than 200 meters long. Despite the considerable number of years gone by, the arched gates are still considered the main ones in Side.

The city museum complex presents rich expositions of archaeological finds: including sculptures, elements of the ancient amphitheater, Roman baths, weapons and many other valuable items. Such excursions in Side allow you to get acquainted with the life, traditions and culture of the city, and therefore are always a success.

Wide ancient street with numerous columns in Side

Columned streets stretch from the market square to the arched gate. The name of the attraction was chosen due to the columns of their stone, built on each side of the avenue. Being a historical monument, the object is protected by the state. Souvenir shops and trading shops are located along the entire street. 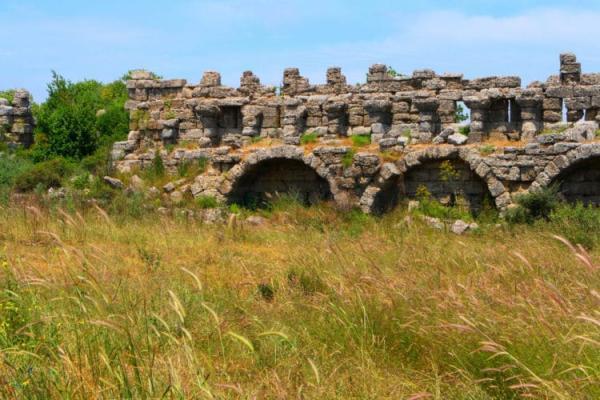 A small part of the preserved ancient Roman aqueduct in Side

An established water supply system, which in the era of Roman civilization provided the city with water. You can see aqueducts in various parts of the Mediterranean. They are a stark reminder of how great and progressive the Roman Empire was. The length of the aqueduct in Side is about three dozen kilometers, about 10 of them run through tunnels. Even if your trip to the resort is short, you should not leave such sights of Turkey without attention. 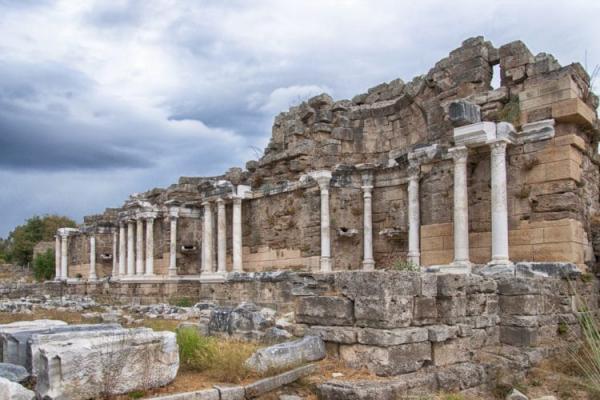 In the second century, a unique architectural object was built opposite the city gates: a marble sectional building on three levels, five meters high and 35 meters long. A pool was placed near the fountain, into which the waters of the local river flowed. The building is decorated with frescoes, sculptural compositions and exquisite niches. Unfortunately, only two levels of the Nymphaeum have survived to our time. However, reviews about them are consistently enthusiastic. 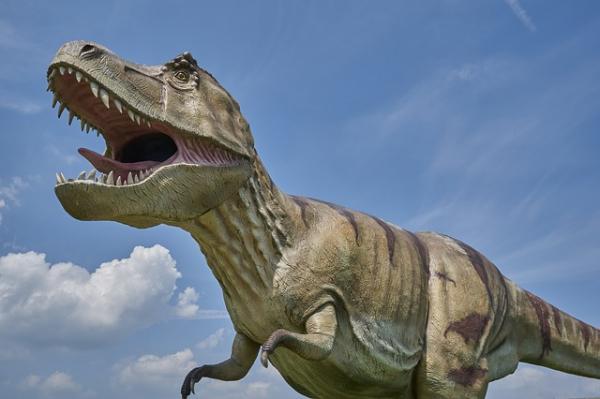 What to visit in Side with the whole family? In the original park complex, divided into thematic sectors: there is a small menagerie, a plot with figures of famous cartoon characters, a terrarium and an aquarium, an area with sand figures and a park with dinosaurs. You should set aside a full day to explore the entire entertainment center.

Ferris wheel in the evening at Aktur Park Oliver Ponsold

One of the most visited attractions, which is visited by both vacationers in Side and tourists from Kemer and Antalya. There are more than 4 dozen rides on the vast landscaped area – some of them are extreme, some are designed for kids of different ages. Children will be able to visit the autodrome with cars, jump on trampolines, ride on carousels and on the “real” railway. The park has a Ferris wheel. Fairy-tale heroes, clowns and pirates walk around the territory. Their figures are placed throughout the complex. If you don't know where to go in Side to have fun, come to Aktur Lunapark.

Side attractions: what else to visit in Side?

We have briefly named the main attractions of Side for you. If you have already seen them with your own eyes, pay attention to such objects as:

This ancient architectural masterpiece, built in the 13th century, is included in all ratings of the “Best Side Attractions” for a reason. The width of the bridge is about 5.3 meters, the length is more than 200 meters. The design is represented by five large stone arches. If you look at it from the side, you can see the “hump”. If you want to see the most colorful views of the river and take great photos against its background, Aspendos will help you with this. 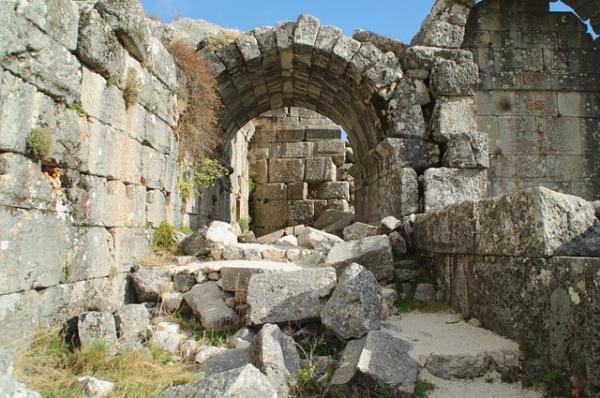 Even the best hotels in Side cannot boast such a majestic view as these examples of Byzantine architecture. Date of construction – 6th century BC. The basilica consists of several halls connected to each other by corridors. Particularly interesting is the central room with the original altar – inside it is round, outside it is triangular.

Not far from the basilica is the bishop's castle. Each room has its own shape. The objects were united with the help of the tomb. The total area of ​​​​the attraction is ten thousand squares. Guides in Side can tell you many fascinating facts about these historical masterpieces.

Agora is the name of the largest 90-meter trading ancient Greek square. Many centuries ago, whole crowds of people gathered here, craft workshops, temples and market stalls worked. The perimeter of the square, built in the second century, was surrounded by granite columns forming a fence. Above the columns is a wooden roof, decorated with antique statues on pedestals. The Agora complex includes the ancient temple of Tyukhe. Remember our recommendations on vacation, and be sure to take the time to explore both sites.

Near the old Side there are western and eastern beaches. If you come on vacation with children, we recommend that you choose the first option. There is no abrupt entry into the water on the western beach. Swimming will be safer. Along the entire coastline there are hotels and outdoor cafes, attractions for children.

Side East Beach is less crowded, but the descent into the water is not so gentle. The line is suitable for those who are fond of meditation and yoga, diving and windsurfing.

Literally all the beaches of the Turkish resort are covered with pleasant fine sand. However, the water is noticeably cleaner on the pebble lines. 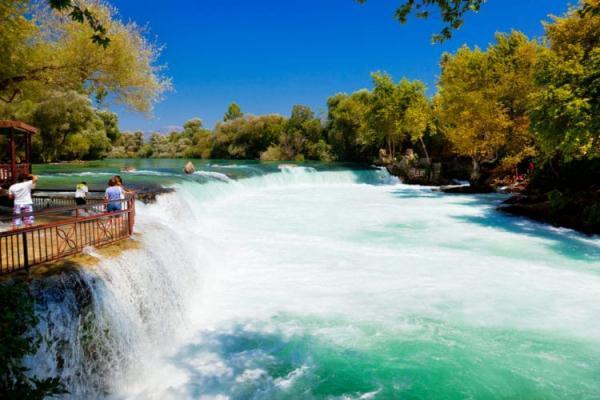 If you want to see the incredible beauty of Turkish nature, head to Manavgat. It is located in the delta of the river of the same name, and is a huge hit with both tourists and locals. This is the best place for a relaxing outdoor recreation. Along the banks of the river you will see souvenir shops, traditional teahouses and restaurants serving fresh trout caught on the spot.

16. Trout farm on the Manavgat River 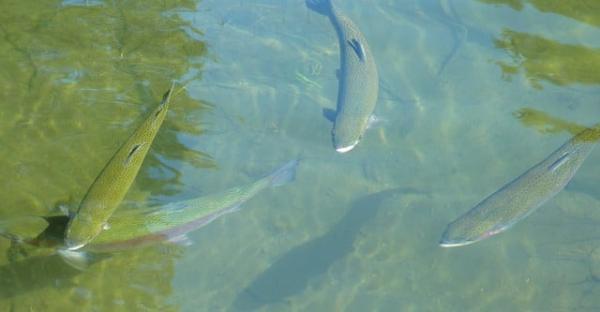 Trout is bred on each bank of the Manavgat. The freshest catch is immediately sent to various Turkish restaurants and cafes in Side. Arriving at the farm, you can look at the fish and learn about their habitation, reproduction and nutrition. And also taste wonderful fish dishes from the trout that you have just caught.

We hope that you will want to personally visit those sights of Side, the photos with the names and descriptions of which you have just seen. Read also about the best sights of Istanbul and get inspired for your further trip to Turkey.