A leading Russian company providing digital, media and telecommunications services, announces the launch of the federal environmental project “Place of Power” in the Republic of Khakassia

As part of the project, MTS created VR films dedicated to the two most interesting protected areas – the Oglakhty section; reserve “Khakassky” and the reserve “Pozary named after V. M. Zimin”, which tell about the nature and ancient history of Siberia. In the near future, the company will provide key educational, cultural and scientific institutions in Khakassia and the Krasnoyarsk Territory with equipment for viewing educational films in virtual reality.

Films created by MTS with the participation of specialists from the Khakassky Reserve are virtual tours of hard-to-reach sights in the mountainous part of Siberia. Places where tourists can usually get only as part of organized groups are now available to residents of all regions of the country on the website of the Khakassky Reserve. The videos were filmed in the “video 360” format. using an omnidirectional camera. This allows you to get a more complete and voluminous idea of ​​the natural areas that have become the “protagonists” of the VR movies. Among the first, MTS provided equipment for viewing videos in VR formats to the Krasnoyarsk Regional Museum of Local Lore.

The video dedicated to the Oglakhty site includes footage of large accumulations of rock paintings – here is the largest location of petroglyphs in Khakassia. Due to the low water level in the summer of 2022, MTS has digitized rare endangered images that are located below the water level of the Krasnoyarsk reservoir. Among them are the rarest petroglyphs, presumably denoting a primitive bull – tour. Another MTS VR film tells about the Pozarym im. V.M. Zimina» and introduces viewers to the nature of mountainous Siberia, rare and endangered species of animals that live here.

MTS also added to the collection of inclusive tactile forms for excursions that take place along the paleontological route of the Oglakhty site. Installed as part of the “Place of Power” sculpture «Dinosaur Nest» is a collective image of egg laying, which could be left by representatives of large therapods – bipedal predatory lizards, which supposedly once lived on the site of the Khakass-Minusinsk depression. The sculpture is accompanied by an informational banner, on which regular text is duplicated in Braille. 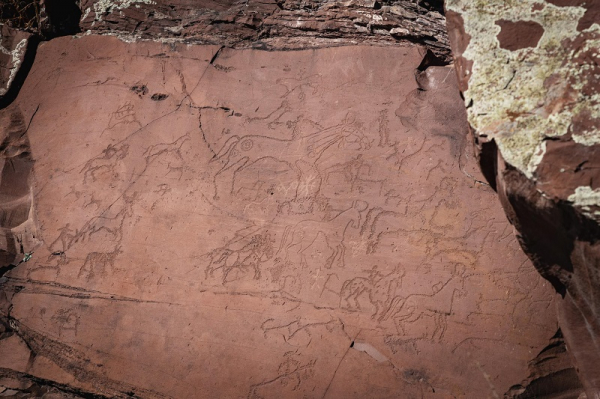 The place of power of Oglakhta

"Analytics of MTS Big Data shows that every year the tourist flow to Khakassia is increasing– in recent years, growth has been more than 40 percent. Mostly residents of the Krasnoyarsk Territory, as well as travelers from Novosibirsk, Tyva and Kuzbass, go to the republic. A lot is being done in the region for the development of tourism, and our company is also making its contribution, both through the implementation of social projects and actively building a network on the territory of the republic. So, in recent years, we have improved the quality of communication in the most important tourist locations of Khakassia: in the village of Priiskovoe, in the area of ​​the Sayano-Shushenskaya hydroelectric power station, on Gladenkaya, on Lake Bele, in the Shirinsky district. Khakassia – a region where even the landscapes are reminiscent of the amazing history and ancient peoples who once lived here. I am sure that our project will draw even more attention to the “places of power” Republic, telling the inhabitants of all regions of the country about the beauty and uniqueness of its nature and historical heritage”, – said Olesya Shiryaeva, director of MTS in Khakassia.

“Oglakhty” – it is “concentrated” Khakassia: steppes, mounds, traces of peoples who lived here for thousands of years, and a gallery of rock carvings where you can get an idea of ​​the life of the Scythians, Huns, Yenisei Kyrgyz and other ancient cultures. Thanks to the MTS project, to virtually “walk” through the protected area and «make an ascent» thousands of people will be able to climb the rocks. We are pleased that MTS has come up with a socially significant initiative and launched a project that creates new opportunities for the development of environmental education and educational tourism, – said the director of the reserve “Khakassky” Victor Nepomniachtchi.

About the project “Place of Power”
Project «Place of Power» — part of a comprehensive program of MTS in the field of ecology, aimed at creating the necessary infrastructure for the protection of natural objects and the conservation of populations of rare animals, raising the level of ecological culture of the population and its involvement in the conservation of natural heritage, as well as the development of ecotourism. As part of the MTS program, in close cooperation with national parks and reserves in Russia, it creates free digital products for environmental education, including VR guides, online tours and other services for children and adults, and also introduces technological solutions for observing rare animals and combating forest fires, poaching, vandalism: video surveillance systems and camera traps with artificial intelligence technology.
Khakassky State Nature Reserve
The only natural reserve in the Republic of Khakassia. The structure of the reserve includes 9 sites, which are located in 5 districts of the republic. This geographical location provides a high diversity of landscapes, habitats, as well as the richest variety of plants and animals living in the protected area. The total number of plant and animal species recorded in the Khakassky Reserve accounts for 89.7% of the total number of plant and animal species in the Republic of Khakassia and 40.3% of the total number of plant and animal species in the Altai-Sayan Ecoregion.