From 3 to 5 June Stary Oskol lived in the theme “Poetry mix”. This is an interweaving of art forms: music, theater, painting, graphics, cinema. The venues for the “SPLAV” have become the epicenter of talent, music, poetry and the concentration of creative people.

The third festival of poetry “SPLAV”, organized by the Alisher Usmanov Charitable Foundation “Art, Science and Sport”, has become a bright event in the cultural life of the Belgorod region. On June 3, TV presenter and art critic Maria Tretyakova gave a lecture on Fashion Poetry. The audience plunged into the chronology of the domestic fashion of the 20th century, described in the poems of contemporaries. And then at the master class, together with the Moscow Theater of Poets, the audience was able, in cooperation with guru Vlad Malenko, to read their poems, participate in tasks for student actors, hear sparkling fables and get to know the young talented artist of the theater of poets Alexander Antipov better.

The most intense program awaited the guests on June 4th. Immediately in several locations of the Center for Cultural Development “Molodyozhny” there was an interactive program for children, solo performances, plein air, a show of doubles of poets. The organizers presented an unusual lecture program with the participation of literary critics from Moscow Asya Zanegina and Nikolai Zharinov.
«A unique event for the district and Belgorod region – festival of poetry «SPLAV», it has already fallen in love with the Stary Oskol people. I am sure that this tradition will continue in our city, because these days the city is overwhelmed by a stormy ocean of emotions at various venues, various areas of poetry and other types of art are presented here. I am glad that our youth takes an active part in many venues, – Andrey Chesnokov, the head of the Stary Oskol city district, emphasized opening the festival. 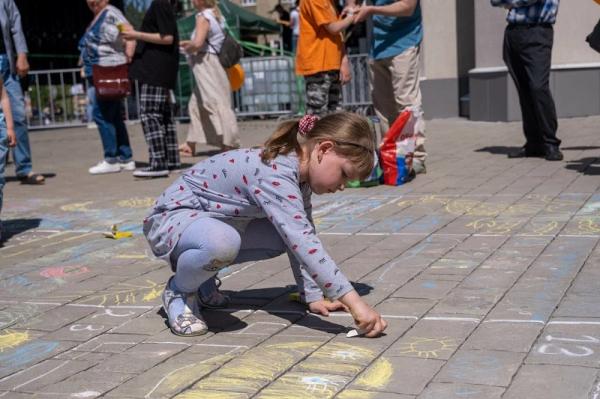 During the grand opening, the names of the winners of the grant competition “Synthesis of Arts” were announced, which were Stary Oskol's Sofya Oreshkina and Dmitry Cherny, whose projects can be seen at “SPLAV” a year later.

The star guest of this day was the poetess AkhAstakhova, and the solo performance was presented by Maria Tretyakova. The headliners of the evening were the Brothers Grim group.

"I came with bright lyrics that suit summer, so that people who came to the concert, got positive emotions and left in a good mood, – spoke about her program “It won't always be like this” Irina Astakhova (AkhAstakhova).

The bright talented actors of the Moscow Theater of Poets again performed on the main stage under the direction of Vlad Malenko, artistic director of the State Museum of Sergei Yesenin in Moscow.  «Poetry – this is what draws attention to the time in which we live, helps to hear it. For me, the meeting with the Stary Oskol people, our dialogue is important. I am sure that Stary Oskol will soon sound like a poetic metaphor, – shared by Vlad Malenko.

An unusual performance in a tram was prepared by a young Stary Oskol director Nikita Klen. In total, the program «SPLAV» this year over 100 poets, artists, designers, musicians and bands took part.
“We managed to fill the city with events and connect a huge number of local directors, actors, poets, artists,” – noted Nadezhda Titova, head of the Cultural Poster project; Foundation “Art, Science and Sports”.
«We really liked it, unusual atmosphere, interesting collaborations turned out», – says Lyudmila Matryonina, the organizer of the talent market “Bloshka”, which has successfully integrated into the cultural program of the festival.

Maria Tretyakova's lectures were a real sell-out, cases from the Moscow Theater of Poets became a revelation, and AkhAstakhova's musical and poetic composition and a creative meeting with Anton Shagin will be remembered by the public for a long time as the most sincere events. “When you read your poems, the insides change places,” – so he spoke about the sensations from reading his own “Antonovka” to the public the famous actor and poet Anton Shagin. And he presented the meeting participants with his books with a commemorative inscription.

In total, during the professional and main program of "SPLAV" more than 1,500 people from Stary Oskol, Gubkin, Belgorod, Chelyabinsk, Arkhangelsk and other cities visited.
“Any city festival – this event is for everyone. I would like every city dweller to participate in it, so that this festival would attract more attention not only from the inhabitants of the Belgorod region, but also from those people who live in Kursk, Voronezh and other regions, – emphasized Nikolai Trotsky, Communications Director of the Art, Science and Sports Foundation.

Details: in the festival group https://vk.com/festsplav2022
and on the site https://www.artoknofest.ru/