House on the rock. What does a hotel look like suspended at a height of 3000 meters?

You have to climb a steep slope to get there 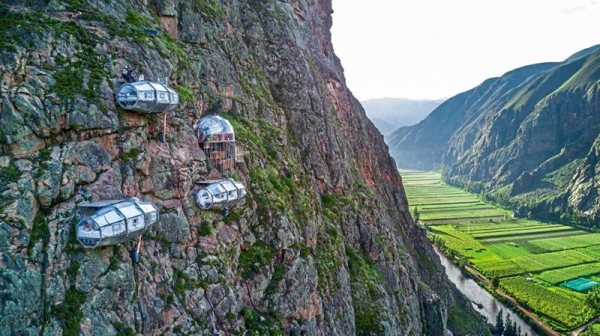 House on the rock. What does a hotel look like suspended at a height of 3000 meters?

Austrian newspaper Shtandart compiled a list of the 50 most unusual hotels on the planet. The TOP-3 includes the Skylodge Adventure Suites hotel in Peru.

The name Skylodge can be translated as “Sky Gatehouse”. The fact is that the hotel rooms are plastic capsules suspended on a sheer rock at a height of 400 meters from the ground.

The rock is located in the Sacred Valley of the Incas at an altitude of about 3000 meters above sea level. The valley of the Urubamba River is considered the birthplace of this ancient civilization.

It is in this part of the Andes that the city of Cusco, the capital of the ancient Inca state, stands. Now it is the regional center of Peru, where about half a million people live.

The Skylodge has only four rooms, a reception and a dining room. To get there, you need to climb a sheer cliff with insurance, clinging to pre-prepared pins.