On October 19, 2022, at 12:00 pm, the grand opening of the world's first Falcon Post station will take place at the Konstantin Sokolov Falconry Center. The idea of ​​opening the station belongs to Valery Sushkov, traveler, creator and head of the Postventure tourism and postal project, participant and organizer of more than a hundred different expeditions on six continents. 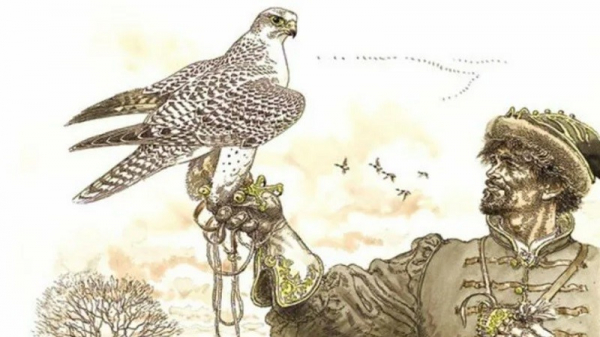 This is not the first such project that Postventure is implementing. Prior to that, they had already launched bee, dog, bottle, taiga… more than a dozen different mail messages. All of them are aimed at promoting domestic and inbound tourism, as well as supporting individual tourist sites. Falconry is recognized by UNESCO as an important part of the world's intangible cultural heritage in 18 countries around the world. The project decided to make its own contribution to its revival and development.

Especially for “Falcon Post” Postventure has created a new philatelic set that includes: an envelope, a postcard, a maximum card and a stamp, as well as an unusual 3D wooden vignette stamp.

"Face" philatelic series was the Saker Falcon Dulcinea – a fourteen-year-old representative of the falcon family, a star of the excursion programs of the Falconry Center, a theater actress (Dulcinea played at the Taganka Theater in the play “Chronicles” based on the works of Shakespeare), a participant in educational programs on radio and television.

At the opening of the Falcon Post Office Dulcinea in free flight will deliver letter No. 1 to a special mailbox. The flight of the falcon will be one of the most spectacular moments of the holiday.

See also  Koh Samui in October: rain is not a hindrance to rest