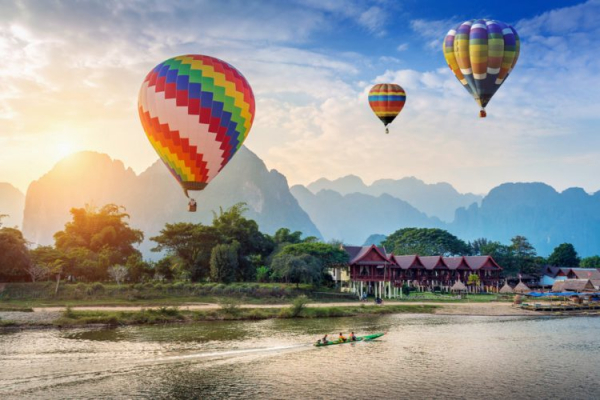 The small state of Laos is a wild, exotic, many-sided neighbor of the well-known Vietnam and Thailand. Although there is no sea here, this moment is compensated by the various sights of Laos – ancient temples, whose history is measured in centuries, dense tropical forests, mysterious caves, picturesque mountains, gorges and waterfalls, as well as a special way of life of the inhabitants inhabiting this state. One way or another, you will not have any questions about what to see in Laos, the choice of interesting places here is very rich. Warm weather in Laos pleases at any time of the year, you just have to take into account the rainy season.

What to see in Laos in the first place

Despite the fact that tourism in the country is only developing, hotels in Laos are classified according to the European service rating system. Excursions in Laos do not involve fuss and running around, each trip is an opportunity to get acquainted in detail with another attraction that has its own unique secret. Therefore, when choosing what to see in Laos in 1 day, it is worth focusing not on quantity, but on quality – a thorough acquaintance with each historical or natural monument will allow you to soak up the spirit of these places and discover the true Laos. And the rating of interesting places in Laos will allow you to choose the best attractions for your travel itinerary. 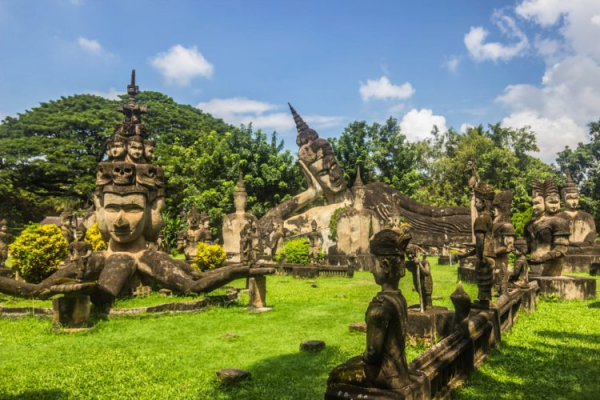 The central sculptures of Buddha Park with a religious theme

All guides in Laos recommend visitors to the country to visit this place. Buddha Park is located 20 kilometers from the capital of Laos – a sculptural complex in the very center of the park area. This landmark of Laos is famous for its amazing Hindu and Buddhist statues, arranged here in a chaotic manner, there are more than two hundred of them in total. Each of the sculptures is unique in its own way, the painting technique gives the impression of antiquity – nevertheless, the whole complex is a modern creation. Especially popular is the bright 3-storey building, which embodies three religious incarnations – earth, hell and heaven. Once inside, you can see with your own eyes what awaits you in each of these places. 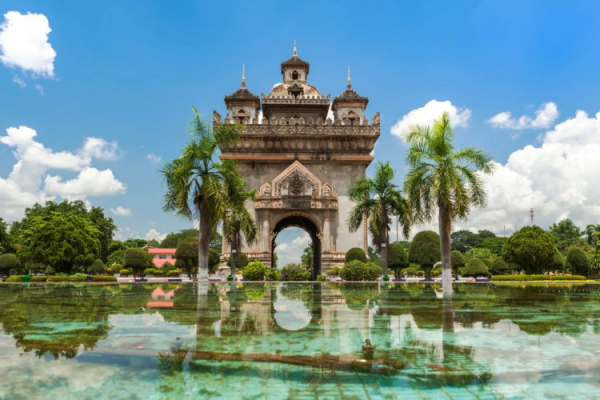 When choosing what to see in Laos, namely in its capital, you should pay attention to the Patusai Arch. The building was erected in the very center of Vientiane in the late 60s of the last century. Structurally, the architectural masterpiece is a copy of the Arc de Triomphe in Paris, but it is a few meters lower. The arch symbolizes the struggle for the independence of the inhabitants of Laos from the French and Americans. Today, locals are proud of their symbol of independence, immortalized in this monument. On the towers of the arch there are 4 observation platforms from which you can see the panorama of many city streets. There, tourists can buy souvenirs and other paraphernalia in numerous shops, as well as visit a cafe. 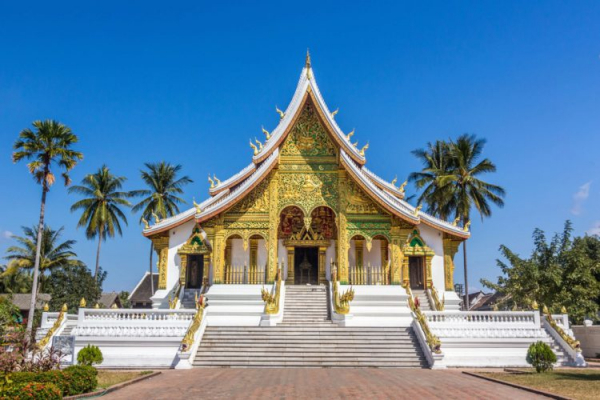 In the northern part of the republic, two hundred kilometers from its capital, there is another attraction of Laos – the Ho Kham Palace. Initially, the palace, decorated in Lao and neoclassical French styles, was built in honor of the first ruler of the republic – Sisawang Wong, and today a museum is located inside the palace. Among its famous exhibits is an exact copy of the Golden Buddha, presented by the Khmer king to the ruler of Laos. The frescoes on the walls of the palace deserve special attention. There is also a majestic temple on the territory of the palace complex, within the walls of which the royal throne is located under the watchful attention of local guards.

What to visit in Laos from natural sites? One of the most revered sanctuaries and the most important sights of Laos is the Pak Ou caves. This cave complex began to be used as a temple even before the advent of Buddhism. And with the advent of Buddhism, the caves began to replenish with countless Buddha figures of various sizes and shapes, and today their number is several thousand. The locals are sure that a good spirit lives in the caves. The great cultural value makes these caves an important attraction. 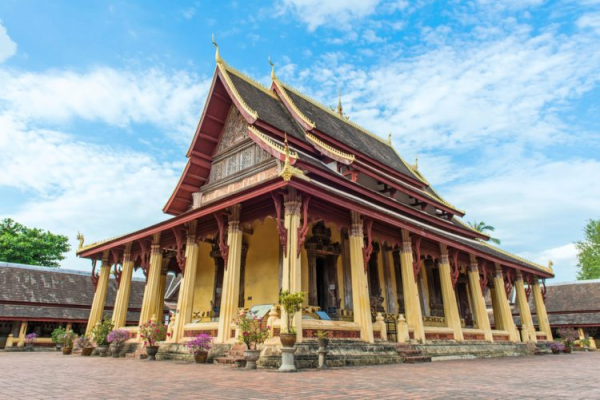 View of the temple in Wat Sisaket

Wat Sisaket is a Buddhist landmark of Laos in the capital Vientiane, built in 1824. According to some versions, this temple is the oldest in the capital; in the 20-30s of the last century, it was thoroughly reconstructed. The temple itself is surrounded by a wall, which is not typical for Buddhist sanctuaries. More than 2,000 silver and ceramic Buddha figurines are installed in the niches of the temple. In general, the Wat Sisaket complex includes several buildings – for example, there is a library with a lot of valuable manuscripts. The main temple is generously covered with frescoes, which are considered the most ancient in the entire city. In the center of the pagoda stands a large statue of Buddha with a snake covering the deity. Around the temple there are cells for the servants of the temple.

See the beautiful places of Laos in this wonderful video!

Laos attractions: what else to visit in Laos?

The main attractions – this is not the whole list of places to see in Laos. Other interesting and memorable places deserve special attention, and if you have some time left, we recommend that you go on a trip to other equally attractive sights of Laos, the rating of which is given below. 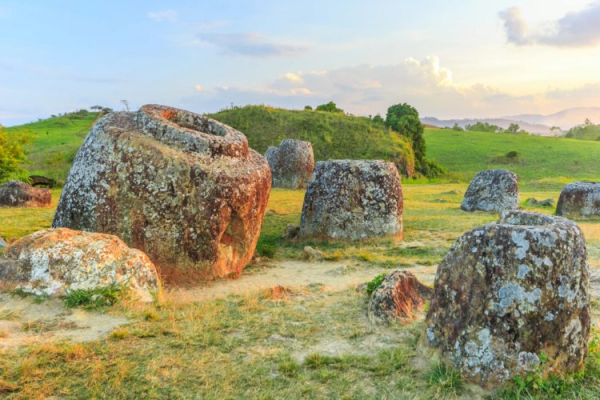 Landscape of the mysterious valley of pitchers

What to see in Laos in the province of Xiankhuang? Of course, this is, first of all, the Valley of Pitchers – a mysterious place, over the entire area of ​​​​which thousands of stone vessels are randomly “scattered”. Giant jugs have different shapes – from cylindrical to rectangular, ranging in size from half a meter to 3 meters, some of them stand upright, others are knocked down. It is assumed that the age of these products is from 1.5 to 2 thousand years. There are countless assumptions about why and by whom these peculiar giant vessels were created. According to the description of scientists, they were used by the ancient peoples, and historians believe that the pots could serve as funerary urns. There is also a version that the vessels were used to collect rainwater. Locals believe that rice wine was kept in the jugs.

The golden figure of the reclining Buddha in the open air at the Pha That Luang Temple < p>Having wondered what to see in Laos, it is recommended to definitely pay attention to another attraction of Laos – this is the Pha That Luang temple, also called the Golden Stupa. This recommendation is justified – the pagoda has become a symbol of the whole country, and since 1991 its image has even appeared on the coat of arms of the republic. The temple itself is perhaps the most revered sanctuary in Laos. The history of the temple dates back 4.5 centuries – it was erected in 1566, and immediately after its construction, other temples were erected around the shrine. Today, on the territory of the pagoda there are a lot of Khmer and Lao statues, there is also the current residence of the Lao patriarch. The Great Stupa Festival is held here every year for three days in November.

Green mountains along the banks of the Mekong

The main water artery of Laos is the Mekong River, along which the movement of water transport is well established. If you advise where to go in Laos for vivid impressions, then this is certainly rafting on a boat on the Mekong – a great way to get to know the country from the inside. The sources of the Mekong originate in the mountains of Tibet, and making a path of 4.5 thousand km, the river flows into the South China Sea. The river coast has become an ideal place for a large number of the population of Laos to live. There are many rice plantations, and countless fish in the waters. Nevertheless, the huge hydropower resources are practically not used here – the level of technical development of the country is very low. 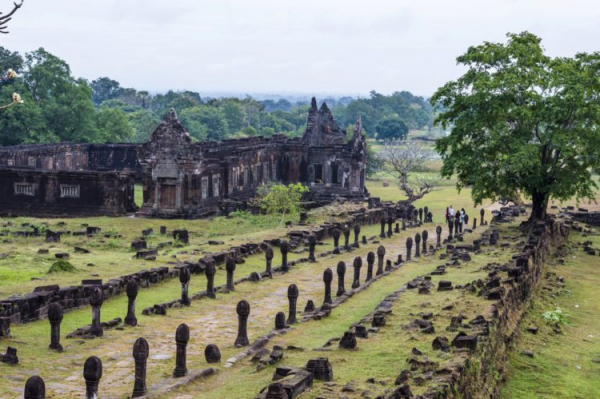 An ancient road among the ruins of Wat Phu temple complex

What to visit in Laos from architectural monuments? The ruins of the Wat Phu temple complex is an original monument of Khmer history, a rock temple, built presumably in the 6th-12th centuries on the foundations of more ancient sanctuaries. The temple is surrounded by palaces in the early Angkorian style – northern and southern, the purpose of which is still unknown. The architecture of the temple complex uses Cocker and Angkorian styles, and the skillful wood carving on the facade delights with the subtlety of detail. From the rock next to which the temple is located, a healing spring beats, this makes Wat Phu a unique structure among all the buildings of the Khmer civilization.

In the middle of the jungle there is a picturesque natural attraction of Laos – Tat Kuang Si waterfall. The beauty of the waterfall is complemented by a large number of rapids along which water rushes down in cascades, as well as an unusual bluish tint of water that occurs due to the interaction of lime and carbon dioxide contained in the water. The highest threshold of the waterfall is 54 meters in height, it is he who reproduces that deafening roar of falling water, which is already heard from afar. The waterfall becomes full-flowing during the rainy season, which lasts here from August to November.

Traveling to Laos does not look like a typical vacation with passive rest on the sea coast, but reviews about the trip are always only positive. There are no noisy parties, extreme entertainment and running around, but the atmosphere of calmness, peace and unity with nature reigns, and a holiday in Laos ends with a mass of beautiful photos and wonderful memories. Near Laos is a country with many temples and natural attractions – Myanmar. When traveling around Laos, think about visiting this country as well. Read about the sights of Myanmar and get inspired for your next trip to Asia!