All Allegro trains that ran between St. Petersburg and Helsinki for 11 years have been decommissioned

The journey between the capitals took only 3.5 hours 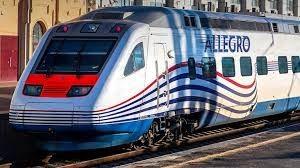 All Allegro trains that ran between St. Petersburg and Helsinki for 11 years have been decommissioned

Finnish state railway operator Suomen Valtion Rautatiet (VR) has published financial statements showing that the company has written off all rolling stock and parts of Allegro high-speed trains that have been running between Helsinki and St. Petersburg since 2010.

The total value of the decommissioned property is 45.4 million euros.

Allegro trains were built in Italy specifically for the harsh conditions ovy Severa. In total, the Italians made four trains of seven cars. They were owned by the Russian-Finnish joint venture Oy Karelian Trains (VR and Russian Railways each had 50% shares).

It took only 3.5 hours to get from St. Petersburg to Helsinki. The border control was right in the building of the Finland Station. Then, during the trip, Russian border guards and customs officers approached the passengers again, and after the border near Vyborg, Finnish ones.

In Russia, the train stopped only in Vyborg, in Finland – in Vainikkala, Kouvola, Lahti, Tikkurila and Pasila . The train was equipped with comfortable reclining seats and served as a dining car serving Finnish cuisine. It reached speeds of up to 220 km/h.

See also  Prices bite: the average cost of a tour to Turkey this summer has been named